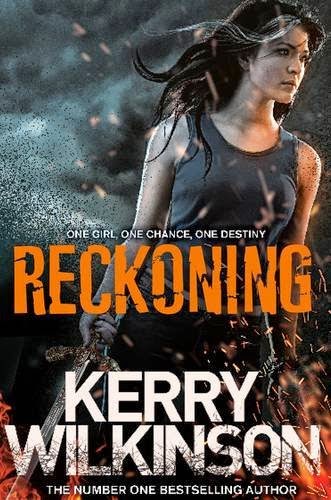 England at some future time, and along with the other 16 year olds from her village, Silver Blackthorn is awaiting the Reckoning - this test 'grades' adults and determines their social position - Elite, Member, Inter or Trog. Also, each year a number of teenagers are chosen as Offerings to serve King Victor in his castle at Windsor; everyone sees this as a privilege but, when she finds herself among those chosen, Silver begins to have doubts. Arriving at the castle, her misgivings multiply; the atmosphere there is one of rumour and suspicion, no one will speak of what happened to the previous years' Offerings, and King Victor is not the charismatic leader everyone believes him to be but a brutal drunken bully. Keeping quiet and unnoticed is the first step to safety, and the next is finding a way to escape.....

Set in a post-civil war future England, Reckoning is a dystopian action adventure/thriller bound to appeal to fans of The Hunger Games. There are, to be honest, a lot of similarities with other teen dystopian novels - oppressive regime, a self-confident heroine, a love triangle in the making and a rebellion about to kick off - but that doesn't stop this being an excellent read. The story starts quietly and a little predictably - Silver will obviously be chosen as one of the Offerings - but the action increases and the tension mounts. Considering that the panning out of the story-line is fairly obvious, the author does an excellent job of screwing up the tension and keeping the reader on the edge of their seat.
Silver is a likeable heroine, resourceful and quick-witted but not so over-confident as to lose the reader's sympathy; she's ready to face up to authority rather than meekly accept its dictates. The choice of villain can make or break a book - and I rather liked King Victor in this role; with his ginger hair and piggy eyes, his choosing and discarding of the most attractive girls, his drunkenness and random violence has a definite touch of the elderly despotic Henry VIII about him.

The main snag is the all-too-common first of a series one and the long wait till Book 2.