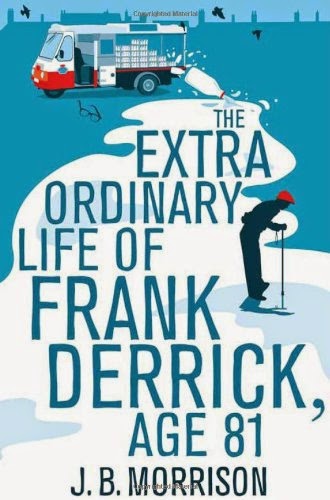 Frank Derrick has just turned 81 - but his only birthday surprise was being run over by a milk float. Now, with a broken arm and fractured foot, he's not looking forward to the next few weeks cooped up in his flat with only Bill his cat for company. He didn't get out much before - a trip to the charity shop to pick up some 'bargains' or to the care home where his friend, former punk rocker Smelly John, lives. Now Frank's to take things easy (as if any easier were possible), and to make sure he does, his daughter has arranged a 'carer' for him. Frank's dreading the arrival of a strict no-nonsense matronly type, so young, cheerful Kelly Christmas is a bit of a surprise. In a Mary Poppins sort of way, Kelly doesn't confine herself to housework but sets out to widen Frank's horizons with trips to the beach and the 'big' supermarket. Frank is enchanted but Kelly has only been hired for a few weeks - how will he manage without her?

Rather like The Little Old Lady Who Broke All The Rules or The Best Exotic Marigold Hotel , this is a novel that challenges the way we 'youngsters' see those older than us; they're not all 'old dears' ready to settle for a life of slippers and vegetating in front of daytime TV - some of them at least are still wanting to live things up a little! Frank's life hasn't been special in any way, other than being his life, and now he finds himself lumped in with all the other old folk; all expected to think alike and share the same tastes in music or TV. To say he finds the prospect dreary is an understatement! Kelly's influence turns him around and re-awakens his interest in the world beyond his flat and the charity shop; there are still adventures to be had (maybe on a small scale, but adventures nonetheless), new things to discover (couscous and tattoos) and still some dreams to fulfil.
It's a gently humorous tale which I really enjoyed; it has its sad, moving moments but the overall feeling is upbeat and positive  - and maybe Frank could teach us all something about not giving up on our hopes and dreams?