The One-in-a-Million Boy by Monica Wood 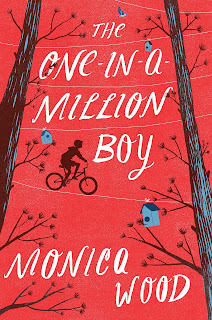 One hundred and four year old Ona Vitkus is an extremely private person; she doesn't make friends easily, doesn't share her life, thoughts or memories with everyone she meets; the neighbours, if they think of her at all, just dismiss her as an old woman with nothing interesting to tell. Then the local scout group send round a boy to help in the garden. He's eleven years old, with a passion for making lists, collecting weird things and knows all there is to know about Guinness World Records. He's also an excellent listener and soon draws Ona into talking about her life - hazy memories of her childhood in Lithuania, sharper ones of running away from home, marriage, children, and the one true friend she had -  while at the same time drawing her into his and inspiring her with things she could still achieve, possibly even her own world record.
Then one day, tragedy strikes, and he stops coming. After a couple of weeks, his father, Quinn, turns up instead, sent by his ex-wife to continue his son's commitment, and Ona must, in turn, inspire him with her new-found ambitions

The One-in-a-Million Boy is a story of a most unusual friendship, and of three lonely people brought together by tragedy, helping each other to heal their emotional wounds, both current and long-held, to put grief behind them and move on to more fulfilling lives.
Ona has lived a solitary life for too long, almost just sitting waiting for her death, hoarding her memories like junk stored in an attic but never letting them out. Sharing them, and engaging with others again gives her a new lease of life.
Quinn's is a life of lost ambitions - both as a musician, and as father and husband - yet he continues in the belief that pursuing them is what he should be doing, while Belle, his twice-married, twice-divorced, ex-wife, is similarly trapped by her on/off relationship with Quinn. Ona oddly proves the catalyst to them re-assessing their lives.
The story emerges from a mix of present day narrative, flashbacks to Ona's conversations with the boy, his recordings of her life story and his lists - with Ona's reminiscences moving towards their conclusion alongside Quinn and Belle's currently unfolding story-line.
There's a fine line between heart warming and being swamped with sentimentality, and, with its themes of the healing power of friendship, of learning to let go of the past and move on, this story could easily have fallen on the wrong side of it but the author deftly avoids it.
I liked the way the story shows that everyone, even the unremarkable old lady you'd pass on the street, has a tale worth listening to, and maybe we should stop and listen more to what our neighbours could tell us. On the other hand, particularly on reflection, I wasn't too happy with the feeling that the boy needed to die for his parents to find happiness. (It is though after all only a story, and not everyone will see it that way)