Book of Lies by Teri Terry 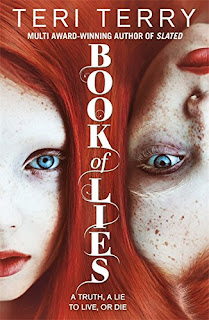 "They are trapped, frozen. Waiting. Straining against the wood that holds them. The unwary catch a glimpse now and then - feel their desperate hunger, see a glint of red eyes - and scurry out of the shadows of the wood, back to the light.
She's coming; it will be soon.
They will run free on the moors again. The Hunt will return.
And the ground will run with blood."

Quinn and Piper are identical twins - but neither knows the other exists. Fearing a family curse, their mother insisted on them growing up apart; Quinn living in a remote house on Dartmoor with her grandmother, almost cut off from the world, not attending school, rarely meeting anyone else, even her mother; Piper living in more 'normal' surroundings in Winchester, with her mother and father, going to school, having friends and a boyfriend like any average teenager.
Their mother always believed that one twin was cursed, full of evil, and would let loose the forces of darkness, while the other was the opposite and may even be able to lift the curse which has plagued their family for generations - but which is which? Now, at their mother's funeral, they're about to meet for the first time...

Teri Terry's previous YA Novels - the Slated trilogy and Mind Games - were set in some vague dystopian future but Book of Lies brings fantasy to a town like yours.The story's premise - twins, one good, one evil, kept apart since birth, haunted by a family curse - sounds like the stuff straight out of fairy tales, but the setting is far from the deep-in-the-ancient-forest style fantasy. Instead events take place on the streets of an average English town and the wilder but still vaguely familiar (camping holidays/DofE) setting of Dartmoor.
Told from the alternating perspectives of Quinn and Piper, the story hooked me from the first page. Being 'in' on the twins' private thoughts while each only knows her side of the story, and being able to put together the pieces about their family curse quicker than they did, kept me reading, wondering what would happen as the story raced towards its climax. It's definitely one of those un-put-down-able YA novels that rival a lot of 'adult' fiction.