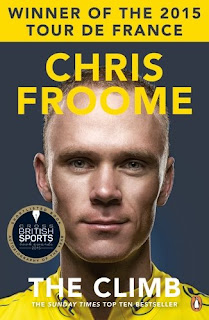 At 430 pages this looks like a challenging read but having read it there isn't a word I'd change. Gripping, exciting and relevant to the development of his cycling career the incidents in his life are told succinctly, with respect and humour.

When we see sports stars burst onto the scene seemingly from nowhere,  we expect their story to be one of having been talent spotted and never putting a foot wrong but that's not so in "Crash" Froome's case. Starting as a youngster in Kenya his bike is anything but a proper sports machine and has to be welded together to keep it going. He has to sneak out of boarding school in South Africa (because it's cheaper than Kenya), to train and smuggle cigarettes and booze into school to raise funds for a proper bike. When eventually riding for the Kenyan national team there isn't even support or feeding stations along the road courses.

And even when he does get into professional cycling he nearly loses his contract because of his lack of performance. And how does he do it? Sceptics will be thinking.... well NO! Read his story and understand the man. Understand his love of the sport and belief in it as a purely man on man contest. Well, team on team to be fairer, although until he learned proper road craft and tactics perhaps he thought of it as wholly man on man.

His story is one of repeated failure but picking his dream up, dusting it off and going again.

There is one criticism I will make of the cover... read the front and read the back and you may expect it to include the story of the 2015 tour - it doesn't, it's a republication of a 2014 book that follows his story to his first win in 2013, and it's probably all the better for stopping there.

The back of the book does say "Inspiring and exhilarating, it will leave you ready to face your challenges in life, whatever they may be." and that may be true but if you want to break into an office job it's difficult to see it helping. As a latecomer to running I certainly find inspiration in this - but I won't be down the Olympics or doing the London marathon.

Read, enjoy, understand and pursue your dreams because they aren't yours by right - only by achievement.