Diary of a Teenage Rock God by Jonathan Meres 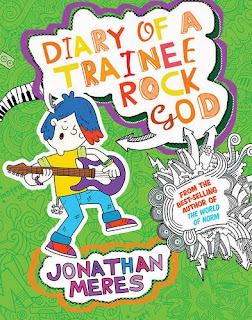 Darren used to want to be a footballer when he grew up - but not any more! Now he wants to be a rock god. First though he needs a guitar, but it's his eleventh birthday next week, and maybe, just maybe, his dad will buy him one. Things aren't quite that simple with Darren's dad though - first he sets a series of clues,and it's only if Darren can solve  them that he stands any chance of getting that longed-for guitar ...


Join Darren on his discovery of all things rock - including the shocking discovery that not only was his dad young once, he was also kind of cool! On the way he shares his lists of things he's learned - from his Top Ten favourite guitar brands, facts about Radiohead and the Smiths, and songs with names in their titles. He can't think of one with Darren in it. Could you? or maybe one with your name?

It's a fun read, aimed at anyone from 8 upwards (even as far as grown-ups who can remember the music from their youth!) and presented in Barrington Stoke's accessible font and layout, with lots of music-themed line illustrations to liven up the pages.