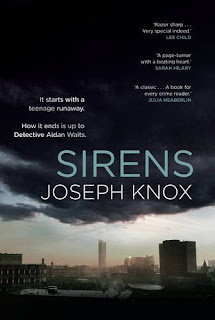 
"Isabelle Rossiter has run away again.When Aidan Waits, a troubled junior detective, is summoned to her father’s penthouse home – he finds a manipulative man, with powerful friends.But retracing Isabelle’s steps through a dark, nocturnal world, Waits finds something else. An intelligent seventeen-year-old girl who’s scared to death of something. As he investigates her story, and the unsolved disappearance of a young woman just like her, he realizes Isabelle was right to run away.Soon Waits is cut loose by his superiors, stalked by an unseen killer and dangerously attracted to the wrong woman. He’s out of his depth and out of time.How can he save the girl, when he can't even save himself?"


To be honest, the blurb for this book (above) didn't really entice me - it had the feel of so many other thrillers, and, having just given up on two domestic noir novels, I wasn't really feeling in the mood for crime. So I ignored the first few people on Twitter who suggested this for my next read, and it wasn't till the book's publicist (whose opinion I've come to know and trust) backed them up that I requested a Netgalley review copy. Cutting a long story short - I'm so glad I listened to her (and sorry I didn't take the word of the others).


There's a lot that you'll encounter in many a crime novel - charismatic but violent drug dealers, corrupt cops, sleazy bars, city lowlifes, double-crossing here there and everywhere, and an unexpected twist at the end - and it's undoubtedly a rattling good read, but there are so many such books that it's difficult sometimes for one to stand out. This for me did, thanks to the 'voice' with which it's told. The story unfolds in first person, in Waits' own words, and he's a narrator who feels like a cross between Chandler's Philip Marlowe and the unnamed guy from JJ Connolly's Layer Cake - someone a little cynical, wise to the ways of the underworld, but who knows that corruption and evil can be found on both right and wrong sides of the law, with his own 'issues' but somehow at heart you know he's a good guy. I'd grown rather fond of him by the end, and I hope he'll be back.