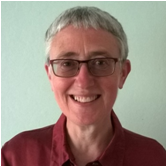 Today we're welcoming Anne Goodwin as part of a blog tour to promote and discuss her latest novel Underneath. To get an insight into it check out Maryom's review but here's a little synopsis from the publisher ...

"He never intended to be a jailer …

After years of travelling, responsible to no-one but himself, Steve has resolved to settle down. He gets a job, buys a house and persuades Liesel to move in with him.
Life’s perfect, until Liesel delivers her ultimatum: if he won’t agree to start a family, she’ll have to leave. He can’t bear to lose her, but how can he face the prospect of fatherhood when he has no idea what being a father means? If he could somehow make her stay, he wouldn’t have to choose … and it would be a shame not to make use of the cellar.


Will this be the solution to his problems, or the catalyst for his own unravelling?"


Maryom; I think my first question has to be, What was the starting point for this novel? Was it the thought of an underground room, and the purposes it might be put to, or did it grow from Steve's character?

Anne; It’s always difficult to be completely accurate about where a novel started, but I’d been thinking about insecure attachment and extreme forms of vulnerability, such as the experience of a baby totally dependent on unresponsive caregivers. When some shocking reports came to light of women imprisoned in a hideaway, within, or attached to, an ordinary house, I thought the emotional experience might be similar. I’m not entirely sure how that got turned around to writing from the point of view of the jailer, except that I had the image of an unhappy little boy in mind and I’m curious about the way in which vulnerability can be expressed in actions that seem, at least on the surface, to come from strength and power.

As I said in my review Underneath isn't the domestic noir or thriller that a reader might expect from its synopsis. Were you ever tempted to go down that route?

I wasn’t aware of domestic noir as a genre when I started writing this novel in 2010 but, even if I had been, I doubt I’d have wanted to write one, despite their popularity. With some exceptions, I’m not drawn to thrillers as a reader because of the way in which character and credibility can be compromised for the sake of plot. But the potential for overlap is tricky in describing Underneath: I think the synopsis is a fair reflection of the story but appreciate that some readers will be disappointed that it falls short on the twists and turns of the classic thriller; others, like yourself, will be pleasantly surprised it takes a different route. But, given the difficulty of predicting reader responses, I’m content to take the themes and ideas that are of interest to me and crafting them into the best story I can manage.

How much do you draw on your experience as a clinical psychologist when creating characters? and  do they appear fully formed or develop along with the story?

Having studied psychology in one form or another for over a decade, and worked as a clinical psychologist for twenty-five years, that experience – and perhaps even more the style of thinking – is integral to who I am. My background gives me empathy for my characters – even the villains like Steve – and an awareness of the complexities and contradictions of the human condition. But, like many people who gravitate to the helping professions, my own vulnerabilities aren’t so different to those of the people I’ve worked with, so I draw on my own demons too.
I couldn’t imagine a character arriving fully formed unless I’d based them on someone I knew, which doesn’t particularly appeal to me, so they develop over various rewrites in conjunction with the story.

By the end of the novel, I felt that, although I wouldn't condone Steve's actions, he was more a victim of his childhood and upbringing than an out and out villain. Is this how you saw him as his character unfolded? How much responsibility for his adult character can be laid on his mother and sisters? Do you think there was a point in his life at which events could have taken a different path?

I’m pleased Steve had that effect on you, Mary. Although I have little experience of working with offenders, I generally found as a clinical psychologist that, if I could support clients to be open and honest with me, I felt a significant degree of warmth and compassion even if I wouldn’t have been drawn to them in ordinary life. Steve first took root in my mind as a sad little boy, so I was always conscious of his vulnerability and, while I was writing, I was very much – perhaps too much – on his side, wanting him to get his own way. In fact, even though I’ve stepped back from him now, I still have a soft spot for Steve. However, although I think he’s partly a victim of his circumstances, he does have choices, and sometimes he’s taken the wrong ones. While his mother’s grief and emotional neglect, and his sisters’ bullying, have shaped his character, they too were doing their best in difficult circumstances and I don’t see them as responsible for what he does. I’ve written in more detail about these issues in some other guest posts:

Compassion for the Criminal, Condemnation of the Crime

The Child in the Clothes of the Criminal

Finally, I like your question about whether there was a point at which his life could have taken a different course. Psychological support for the family when the mother is briefly hospitalised and the children taken into care might have helped, and there’s a huge gap in our knowledge of Steve as an adolescent and young adult where a sympathetic teacher might have channelled him into a more stabilising career. (Perhaps he could have become a clinical psychologist, or an art therapist like Liesel!) But relative to a lot of children and families who come to the attention of services, he wouldn’t appear particularly disturbed and I think there’s an element of bad luck in how things turned out.


Thank you, Anne, that was a fascinating chat, and I'm looking forward to reading your other posts in this tour.