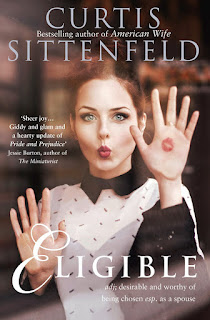 "For sisters Liz and Jane, coming home to suburban Cincinnati means being paraded at the Lucas family’s BBQ, where burgers are served alongside the eligible men. But it’s difficult to focus on re-booting their love lives when the family’s mock-Tudor house starts to crumble around them. Yet as their mother reminds them, it’s not every day you meet a pair of handsome single doctors . . ."

Mr and Mrs Bennet of Cincinnati have been blessed with five daughters. Now ranging in ages from mid-twenties to late thirties Mrs Bennet feels it's time they settled down and got married, preferably to someone wealthy. The two eldest, Jane and Liz, have returned home temporarily due to their father's ill-health, and Mrs Bennet sees this as an ideal time to pursue her plans, especially when they're introduced to two doctors newly-arrived in town, and by all criteria eminently eligible.
In some on line listings, this book is sub-titled A Modern Retelling of Pride and Prejudice, so if you hadn't guessed already, you know now where this story is taking us - into familiar territory with Jane and Liz Bennet, Chip Bingley and Fitzwilliam Darcy. Obviously the Bennet sister's lives are different in the 21st century, (though the younger three are still trying their best to live off Mom and Dad, rather than strike out on their own as independent women) but some things don't change so, although a rich husband is no longer a necessity, everyone is looking for a lasting, loving relationship.

I'm not a purist so I've no problem with re-workings of Austen's work, from books such as Pride and Prejudice and Zombies to films like Bride and Prejudice or Clueless, and really rather liked Eligible. transporting the Bennet sisters to present day America worked better than I thought it would, and although there's less of Austen's cutting satire, I felt overall the book really captured her style.


I'm not sure though that I'd say it's what Austen would write if she were around today. In her time she was innovative, exploring what could be achieved in a relatively new art form, so today I'd don't think she'd be in the 'romantic fiction' section of the book shop. Instead I imagine her writing graphic novels, feminist stand-up comedy, or The Thick of It style political satire - and if the Bennet sisters have a place there, it's a very different one.