Rarity From The Hollow by Robert Eggleton 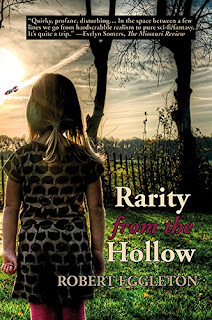 Twelve year old Lacy Dawn lives in the Hollow, a place that the world seems to have forgotten. Her father suffers from PTSD after the Gulf War and family abuse follows as a result. Lacy Dawn's friend's family suffer similarly but her friend was killed through it. But Lacy Dawn has another friend who has his own spaceship - and when Lacy Dawn isn't talking to trees or her dead friend she is taking lessons in the spaceship and falling in love with a robot.

...and Lacy Dawn has to save the universe?

Lacy Dawn is a difficult character to get to grips with as she is intelligent beyond her years yet always the child that she is, as well. Her parents (she is an only child) came across to me as genuine and well written and plausible and her other friends and relatives similarly.

Drugs, used recreationally, feature highly in the books - although not for Lacy Dawn - but they are used to highlight some of the erratic behaviour of characters. Sex also features regularly but behind closed doors only and NOT with Lacy Dawn involved - she is saving herself for when Dotcom marries her. Dotcom is her robot boyfriend from outer space.

Tension and edge of the seat reading did not feature in this book for me but none the less it was a compelling read - one that didn't get me uptight, which was nice for once. It was also laced with humour, not laugh out loud or share with someone in the room humour, but enough to lighten the mood just a little.

And family abuse (in which the children always suffer in some way shape or form) is something the author has spent his career working against so the author proceeds of the current edition of this book are going to a children's home charity.

A great book that doesn't in any way preach yet brings home 2 things:
(1) important social messages
(2) a truly entertaining story