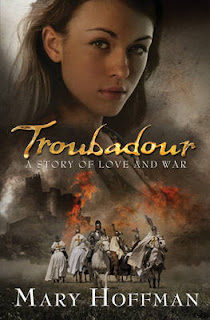 Elinor is a young French noblewoman, in love with the handsome troubadour Bertran and his songs of courtly love, but about to find herself forced into marriage with a suitor many years older than herself. So she hatches a plan to run away disguised as a troubadour herself, to find Bertran and live happily ever after. The south of France though is on the verge of war. The Pope is determined to stamp out the 'heretic' version of Christianity practised throughout the region and when his envoy is murdered he uses it as an excuse to launch a crusade. By a stroke of bad luck, Bertran witnessed the murder and has to disappear for his own safety but also to warn fellow 'heretics' of what is about to be unleashed on them. With an army descending on the south of France,will Elinor and Bertran ever meet again? 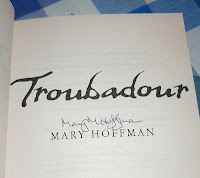 It was reading Kate Mosse's Labyrinth that made me decide to re-read this teen novel set in the same historical period - the Albigensian crusade which ripped through Southern France in the thirteenth century. I first read this a few years ago from the library but shortly after I won my very own signed copy!!

So, how did Troubadour fare on a second read, knowing how it all ends?
Better than before, if that's possible. It's still an exciting historical adventure but first time I'd felt there were side-trackings and loose ends in the love story - mainly because it didn't end how I felt it should have done; this time it read as a satisfying whole.

Mary Hoffman weaves a wonderful story in, around and through real historical events - so while you're carried along by the plot you actually pick up a lot of history on the side. The real and fictional characters blend seamlessly - and there are no 'cardboard cut-outs' just living breathing people whether it's Elinor and Bertran, the Cathar 'heretics' prepared to die for their faith or the villain of the Crusade, Simon de Montfort. Don't expect a sentimental historical romance of handsome heroes and damsels in silk gowns, of honourable knights and courtly love. The author isn't afraid to face the horrors and brutality of the crusade, spurred on by religious fanaticism and plain land-hungry greed - although this is a teen read sometimes it may be a little too graphic for the squeamish reader.

from Amazon
Posted by maryom at 10:57