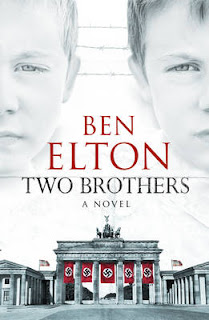 Inspired by his family history, Ben Elton tells the story of two brothers - Paulus and Otto - twins in every way except birth.
When one of an expected pair of twins dies at birth, a Jewish couple adopt an orphaned non-Jewish baby. Frieda and Wolfgang bring up the two boys as equals, not knowing of their different backgrounds, showering them both with the same love and care. But 1930s Germany is not a safe place to be Jewish and when bureaucracy starts stalking them, they and their family are faced with the impossible dilemma of which of them will be condemned for being Jewish and which saved for not?

My review copy of Two Brothers came with a slip which said "hoping you'll be pleasantly surprised". Surprised? I was stunned!
Despite a string of novels and plays, Ben Elton is still to me the stand-up comedian with the dodgy suit, so this epic novel spanning 80 years was something totally unexpected. Two Brothers is an enthralling page turner, a convincing portrayal of  Berlin life through the wild, pleasure seeking, galloping inflation years of Weimar Germany to more sombre ones as the Nazis steam-roller their way to power but at its heart lies the dilemma of two brothers united in everything but blood - they even fall in love with the same girl!
The reader knows from the beginning that ONE brother survived but is kept guessing which - and just when you think you know how it all will end, Elton pulls yet another twist and turn out of the hat!

Two Brothers is a deeply moving and thought provoking story, so if you thought you knew Ben Elton - think again!

..and if you want to hear Ben Elton talking about Two Brothers check out the Waterstones blog

My Goodreads review: Basically - Wow! Totally unexpected as I still think of Ben Elton as a funny-man. Although still there's dark humour, Two Brothers isn't a light hearted book. The story of twins growing up in Weimar Germany, as close as any twins - apart from the fact that one is adopted and isn't Jewish - as the Nazis gain power this means one twin can be saved. But how can a family choose which one? Lots of detail capturing Cabaret-feel decadent Germany of 1920s and the unstoppable rise of Nazis but the heart-breaking dilemma faced by the Twins, balanced by others intent only on saving their own skin, creates an unforgettable story.
Posted by maryom at 11:49