Dave Eggers's book event proved to be unusual as it wasn't really about books as such.
He was interviewed by Patrick Keogh, one of the team behind Curious Arts, and the two discussed Eggers' opinions, ideas, and beliefs, but didn't talk much about his books. It was certainly an interesting event though.
Keogh started by asking "What about Trump?" Now, this is one of those questions that we'd probably ALL like to ask American voters and
Eggers was one of those many Americans who didn't believe it was possible that Trump would be elected. When Trump got the republication nomination, Eggers thought Hilary Clinton would just walk all over him. Then at a rally in California he realised that the average voter saw things differently - that Trump was someone different to the average politician, a guy they'd seen on TV, and somehow thought he was nearer in outlook to them. Even so Eggers was shocked with the election results, comparing the mood in Clinton's office to the fall of Saigon.
Somehow, via a brief mention of Eggers' latest book, Heroes of the Frontier, the conversation moved on to children, their dependence on technology, and lack of self-reliance. Eggers is from Chicago which is a very cynical,cautious place, slow to embrace change, but moving to San Francisco he found himself mixing with the pioneers of the internet,and he knows tech executives who insist that their children lead totally tech-free lives, even sending them to schools where parents pledge their children will not be exposed to social media or even TV at home. He himself is not concerned about kids becoming too dependent on the internet. He was delighted by the Jabberwocky Hunt that had taken place at Curious Arts, and firmly believes that if you leave kids to get bored - for like a minute and a half - they'll find something to do, or make up their own games. They suffer, he thinks, from protection paradox - children are rarely seen out and about alone in SF, they're chaperoned to the park or to school, and this level of protection, although understandable, lets them grow up not knowing how to protect themselves, either in an urban street wise way, or out in the wilds. 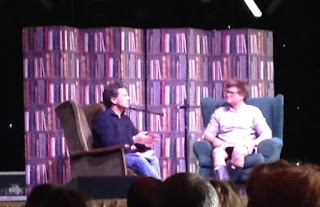 And via children in general, they ended up discussing Egger's 826 Valencia project. He wanted to set up a place where kids struggling with English as a second language could be helped with school work, getting writers with time on their hands to assist the project, but the zoning laws stipulated the chosen premises had to be retail, so the front half of the space became a shop full of pirate related stuff - eye patches, peg legs, parrot food - to comply, and the non-profit tutoring centre occupied the rear. The model was so successful that the ideas expanded to other cities across the US, with superheroes or Big Foot as the shop's theme, and Danny Boyle and Nick Hornby have brought the concept over to Dublin and London.

Certainly, as I said, an interesting event. I've not read any of Eggers' books, but now  I think i shall have to.