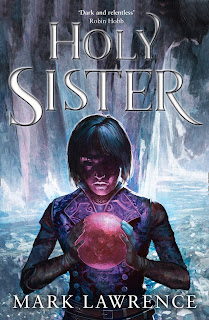 Nona Grey is reaching the end of her incredible story. Rescued from the hangman by the Abbess of Sweet Mercy convent, and trained in martial arts and unseen magics, now she must fight to save the Empire from invaders. Her world is one where only a comparatively narrow belt of land is fit to live on, the rest overwhelmed by ice sheets, one settled long ago by different tribes from another planet, but remains still exist of a civilisation which preceded theirs.

The world building is excellent, character development believable and well thought-through, the plot gripping and well-paced. Swapping between two timelines - one picking up where book 2 left off, the other following Nona as she and her fellow nuns prepare for war - doesn't leave time for a dull  moment

One thing I particularly liked was that Mark Lawrence hasn't created one kick-ass heroine, but  whole convent full to support her. Okay, some of these women are not thoroughly, or at all, on Nona's side, but they're still strong independent women, easily the equal of the male soldiers and spies they encounter. I'd maybe like to have heard more of Abbess Glass's story, but for most of the series she just exists in the background, although her 'long game' shapes Nona's character and actions.


Holy Sister is the concluding part of Lawrence's Book of the Ancestor series (and you DO have to have read the previous two books - Red Sister and Grey Sister - to understand what's going on) but he's already started a new series based among the tribes who live on the Ice, so there's no need to say farewell to this world just yet.