The Dreams of Max and Ronnie by Niall Griffiths 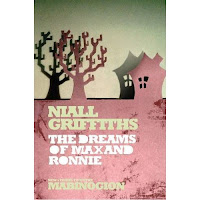 Another book from Seren Press' Mabinogion series - this time re-interpreting two stories - The Dream of Maxen Wledig and Rhonabwy's Dream, both now set firmly in our era.

The historical figure Magnus Maximus, Emperor of Britain in AD383, becomes Max, dealer in drugs and stolen goods, known to his gang as 'The Emperor', who holds court in his favourite nightclub, Rome, and has his finger firmly on the pulse of his city - till one night he dreams of a woman, a 'perfect' woman, living somewhere in the remote north of the country. From then on he cannot rest until she is found but will his quest cost him his 'kingdom'?

As Ronnie's dream the latter becomes a satire on the invasion of Iraq and the modern cult of hero worship. Ronnie is a squaddie about to be sent off to Iraq. Attempting to hide from what may await them, he and his mates set out on a drink- and drug- filled binge, ending up at Red Helen's filthy run-down home where Ronnie takes something that knocks him out for three days, during which he has the strangest dreams of tattooed men fighting and killing while their leaders play Killzone2 on a games console and deny responsibility for the carnage surrounding them. Violent and possibly shocking, this brings the ancient tale to life here and now.

I've loved all the Mabinogion re-workings that I've read, but think this may be the best.