The Meat Tree by Gwyneth Lewis 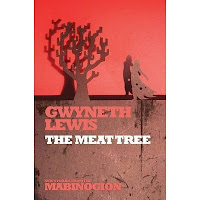 2210 - An old Earth-style space ship is discovered drifting in orbit round Mars and inspectors are sent to check it out. In an attempt to discover what happened to it they log in to its Virtual Reality Games programme - and find a medieval, gender bending, myth based tale in progress - but what has it to do with the ship's breakdown? and what has happened to the crew members?

When I read this was a Sci fi interpretation of the Blodeuwedd myth, I expected something very different to this. I read the Owl Service by Alan Garner when much younger and supposed this would be a similar re-telling but with a futuristic setting. The Meat Tree is a far more complex, multi-layered reworking. The old myth is plainly there in the VR game - helpful if you've never read it - but also echoed in the actions of the wreck inspectors as their identities shift and merge with the VR characters. The story is told through "thought recordings" of the two inspectors, immersing the reader totally in their world.
An unusual and intriguing story about identity, self-determination and survival.


Buy The Meat Tree (New Stories from the Mabinogion)

from Amazon
Posted by maryom at 19:00