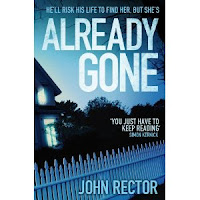 Jake Reese has put his violent past behind him - he's got a new job, teaching at the University; a new wife, Diane; he's even written a book about his life so far. When he's attacked in a car park, he's tempted at first to put it down to random bad luck but then he realises that someone hasn't quite finished with him yet and maybe his past is not as 'behind him' as he'd hoped.

Already Gone is a tense, fast-moving thriller that leads you in and keeps you turning the pages. Told in the first person from Jake's point of view, the reader shares his bewilderment as he finds his world rocked on its foundations. The unexpected twists and turns of the plot left me trying to decide who Jake should believe and trust right till the very last page. As might be expected, it's rather violent, but only when called for in the plot, and I found it possible to step back and not be too disturbed by it. The characters are believable and real, even if some of the lesser ones feel a bit 2 dimensional.
At under 350 pages, Already Gone is an excellent read for anyone who likes John Grisham's style but finds his books too long (that would be me). This is the first John Rector novel I've read and I'm now off to check out his previous one, Cold Kiss.

from Amazon
Posted by maryom at 15:30