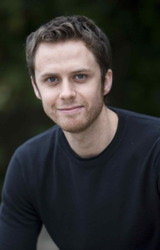 Today I'm extremely pleased to welcome Edward Hogan to the blog. For anyone who hasn't discovered his work yet, he's the author of two adult novels, Blackmoor and The Hunger Trace, and a teen story, Daylight Saving - all set very firmly in my home area of Derbyshire.

I love novels where I can pin down a location - I grew up surrounded by DH Lawrence story settings, have checked Google maps to plot Isabel Dalhousie's walks through Edinburgh and ordinance survey ones to locate Iain Banks' Gallanach, a fictitious town set in a very real location. So when I thought I'd recognised the place down the road in The Hunger Trace, I had to ask....

Did you set the story in actual physical locations or blend several places to create a necessary landscape?  The wildlife park is fairly obviously based on Riber Zoo near Matlock and there are lots of references in your novels to local Derby 'landmarks' (such as the neon Co-op cow that illuminates the sky line). It's not a secret that you grew up near Derby, but you've lived in other places too. Are they not as inspiring? Might a future novel be set elsewhere?

It's definitely a blend of places.  Some of the spaces are very real, but I could never work with a totally real village or town because I have a seriously bad sense of direction.  It's quite extraordinary, and I probably need to get it checked out!  I can't follow directions or maps, and I often remember streets the wrong way round.  Drum Hill Wildlife Park is based quite heavily on Riber Castle as a location, but none of the characters are based on those people associated with it.  The idea of a wildlife park on a hill, and the animals breaking free and roaming the village, was the first image I had for the book.  There were several animal escapes and break-ins at Riber in its later days.  I read about expensive tortoises being stolen, and rare deer being butchered and dragged off in the night, and wallabies breaking out.  I couldn't ignore that!  Eddie Hallam, who ran Riber in its early days, when it was more of a conservation park, really helped me with research.  He's incredibly knowledgeable about animals and animal welfare, and he asked me to point out that nobody in the novel is based on him!!
In terms of Detton, the village in The Hunger Trace, it has a little bit of everywhere.  For the benefit of those who live in Derbyshire, that would be Little Eaton and Duffield, Belper, Morley Lane and Breadsall.  Matlock Bath is mentioned by name.  Some places are entirely fictional, too.  Once I've got the main locations, I tend to draw little maps and floorplans to help me get the space right, and conquer this confusion I have.
As for future novels, I've lived on the south coast for a while now, and I find that the sea is gradually making its presence felt in my writing.  But the voices I hear in my head are often Derbyshire ones.

In both The Hunger Trace and Blackmoor the plot twists round its setting almost inseparably. Which comes first, the story or location? Did one have to shape itself round the other? Did you think 'I want to set a novel in a wildlife park or a coal mining village' or did the story development necessitate such a setting?

I suppose I do come up with locations quite early in the process.  With Blackmoor, I was really taken by this idea of a village with dangerous pit-gases bubbling up under the surface.  It seemed like such a rich metaphor for the 'return of the repressed' in terms of the characters and their secrets, and also for the unfinished political business of coal-mining.  I may even have overdone it a bit!  Location is often about a feeling, for me.  How does a place feel?  I guess, when you look at all the ancient stories, they're often about cursed kingdoms etc.  Maybe that's where it comes from.
Also, the idea of community is very interesting to me.

Your latest novel Daylight Saving is aimed at teens. Is this a permanent departure from adult fiction? Was it always intended to be a teen novel or did it just pan out that way? - after all, Blackmoor has a central teenage character but wouldn't fall into teen/YA fiction.

I am currently working on ideas for both YA and adult stories.  Daylight Saving was a pleasure to write because the idea just arrived in a real burst, and I wrote it quicker than I've written anything before or since.  I had my character, Daniel, and a girl coming out of the water at the sports holiday camp, and it was a case of unravelling the mystery.  I'd been reading quite a bit of YA, because there are so many interesting writers doing unusual things, so I was conscious, quite early, of the fact that it was a YA novel, but I didn't think too hard about that aspect.  I just tried to do justice to the idea and the characters, like I do with any book.

Your motto is, according to your publishers web-page, Double Your Failure Rate. What do you mean by this? It doesn't seem a very positive attitude..

Ha!  It's quite positive, really.  It's sort of sales speak, and it's a bit tongue-in-cheek.  It's just a way to remind myself that writing a novel is a process, and you might have to do it wrong many, many times before you do it right, and that's fine.  Reminding myself of that helps to pick me up when I feel discouraged.

Blackmoor was shortlisted for the Sunday Times Young Writer of the Year Award, the Dylan Thomas Prize and won the Desmond Elliot Prize. I've just heard that The Hunger Trace has been nominated for The Encore Award - aimed specifically at second novels. It must be extremely rewarding and exciting to see your work acclaimed in this way....

It's lovely, and I'm very grateful.  I've been extremely lucky to get published and get a bit of recognition, but I'm just a beginner, really.  Prizes will come and go, and it's important to remember that the main joy of being a writer, I reckon, is sitting at your desk and making things up.

Many thanks to Edward for visiting us today and taking time out to answer questions. I'm looking forward to his next offering - maybe a tale of Derby folk on a trip to the seaside?


To find out more about Edward Hogan visit his Simon&Schuster author page
Read Maryom's reviews; Daylight Saving,  Blackmoor, The Hunger Trace,
Posted by The Mole at 09:00