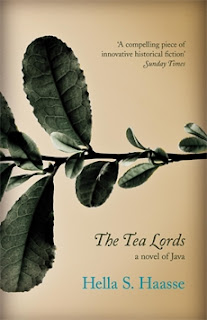 'A novel of Java' says the sub-title of the edition I read, but it isn't a tale of native culture or ancient Indonesian traditions rather one of late 19th century colonial expansion by the Dutch.

Rudolf  Kerkhoven is part of an extended Dutch family with interests in Java. His parents have already left Holland and leased land on which to establish a tea plantation. Having finished his studies, Rudolf goes out to join them. His life appears to be totally mapped out for him; - his parents decided which technical courses he should follow as being of most use to the family business and they have positions within the family enterprises lined up for him. Rudolf has other plans though - he doesn't want to stay as a subordinate but to strike out on his own - rather literally - to clear back the jungle and establish his own plantation, run his way.

As I read I felt rather removed from the emotion of the story - too often told what Rudolf says or thinks rather than hearing it in his own words or seeing things through his eyes. In part possibly due to this, I didn't find him particularly sympathetic character - he always seemed to be arguing with his family, convinced that his way was always right and that the family were in some way favouring his brothers. His only redeeming feature was his love of the country with steep mountain sides covered in impenetrable vegetation - so very different from his native Holland.

The Tea Lords is, without doubt, a fascinating account of Dutch colonialism in Java - a phase of history of which I knew absolutely nothing. Unfortunately the writing style totally failed to grab me.

This book was drawn to my attention by  Iris On Books and the Dutch Lit Month 2012 running on her blog where an ongoing discussion of The Tea Lords is currently (June 2012) taking place. Other readers seem to have enjoyed this book more than I did, so it's worth checking out their thoughts.

from Amazon
Posted by maryom at 10:20