The Handfasted Wife by Carol McGrath 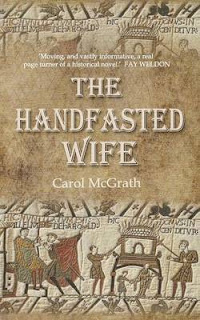 We all know the story of William the Conqueror who invaded England in 1066 and Harold Godwinson, king of England who fought him at the Battle of Hastings and died with an arrow in his eye. But history tends to gloss over the lives of women. The Handfasted Wife brings the events of 1066 - the Norman invasion and its aftermath - vividly to life through the experiences of one woman, Elditha.
Elditha is Harold's 'handfasted' wife, mother of his 6 children. As cousins, the church wouldn't approve their marriage, so they were joined in the old  Norse way of handfasting. This gives Harold an excuse to unceremoniously 'dump' Elditha when he becomes king and make a more politically advantageous marriage. Elditha finds herself virtually banished to her remote country estate, but this doesn't stop her caring for Harold and hoping to be reunited with him or save her from the turmoil of the Norman invasion.

The Handfasted Wife is an engrossing story, covering a well-known period from the perspective not of the men fighting battles but from the women left at home. The author really succeeds at creating the atmosphere of both the women's peaceful world of running their households - spinning and embroidery - working on tapestries like the famous one of Bayeux - tending the sick and helping the poor - and the chaos when this world is attacked by invading Normans; in both scenarios, the reader feels there alongside Elditha. The violence isn't graphic but still manages to capture the horror felt by Elditha.
With the men mainly absent, the strongest characters in the novel are women; Elditha, herself; Edith, widow of King Edward, who believes the best way forward is to accept the invaders as their new rulers; and   Harold's mother Gytha who arms her household determined to resist the Normans as long as possible. These are not shy, shrinking violets but independent women, capable of running their households and estates, used to having a say in affairs and not happy to be treated as 'trophies' or bargaining chips by the conquering Normans.
There are lots of little details to breathe life into the everyday world of Elditha and enough historical background to set the scene without cluttering the story with dry facts. The Handfasted Wife appeals on many levels - it's an interesting peep into a period of history of which most of us probably only know the bare outlines, and a look at the lives of women of that era but it's primarily a story about people, their loves and losses, and trying to build their world anew, not dates and battles.

from Amazon
Posted by maryom at 09:56