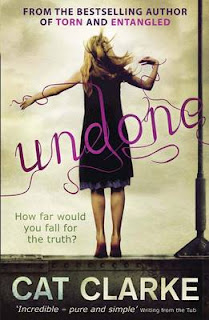 Since childhood Jem Halliday has been in love with the boy next door - Kai. The only snag is, Kai is gay. Jem makes the best of it and they still continue as best friends, spending every spare minute together but then the unthinkable happens - Kai is 'outed' online is such a way that he takes his life. Jem's world falls apart. She almost follows him but is stopped by receiving the first of a series of letters written to her by Kai in his last hours and deciding that revenge on those she believes responsible would be a better plan....

Is it possible to like a book if you don't like the main character? I often say it isn't but in this case maybe it is. I started this book a while ago - and put it down because I didn't like Jem and her attitude - she's far too self-centred. Then, I decided to give it another go and got hooked reading it; although she was still annoying. The story centres on Jem's plan for revenge on the people she feels were responsible for Kai taking his own life - the so called Team Popular, the girls and guys at school that she feels everyone wants to be. As she infiltrates their clique, she grows to see that the people she'd disliked from a distance aren't all bad, that a lot of what she'd thought about them was just her perception and that once she's got to know them they are likeable. As the story progressed, I definitely felt more sympathy for Team Popular than I did for Jem.
It's a no-holds barred story about growing up and finding oneself - and as a parent I didn't like the casual assumption that all 16 year olds drink and have sex; maybe some, let's hope not all, do, but it's too easy for teens to fall into the assumption that that only weirdos and the terminally un-cool don't and this book seemed to re-inforce that outlook.

Overall, I found Undone a rather sad read that left me with a huge sense of loss that so many lives could be ruined by one stupid act.

from Amazon
Posted by maryom at 10:25