The Long Shadow by Liza Marklund 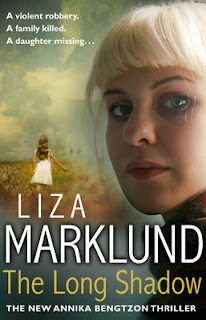 Journalist Annika Bengtzon is uncovering crime and setting wrongs right in an unusual location this time - the Costa del Sol. When Sebastian Soderstrom, a Swedish ex-hockey star, and his family are killed during a robbery in their luxurious villa just outside Marbella, Annika is sent to cover the story for the Evening Post and to do some follow up articles for a series the paper was running about drug smuggling rings operating through Spain and north to Sweden. With the help of a local interpreter, she gets access to the murder scene and discovers something that no one, not even the police, seems aware of - that the family's teenage daughter is missing. In her own inimitable way, Annika decides to investigate, leading her into the murkier side of the Swedish ex-pat community with links to the drug-smuggling world.

I'm sure Annika Bengtzon won't be everybody's favourite crime-busting journalist - after all, she's opinionated, difficult to work with, intolerant of others and their opinions, and as stroppy as a teenager! But despite that, I really warm to her. She does have her good points - she's always ready to follow her leads and instincts fearlessly at considerable personal risk even, or especially, when no one else agrees with her, and she always gets the story in on time. She isn't merely after an exclusive though - it comes across while she's visiting the Soderstrom's home, that she really does care, particularly for the children involved.
With her personal life going through a desperate phase, Annika's investigation is about all she has in life to depend on. The story unfolds over several months, from New Year to Mid-summer, and takes her to Spain and on to Morocco, teasing out links between the idyllic world of luxury villas and golf courses, and the seedier, violent criminal underworld. The Long Shadow isn't as action-packed or dangerous as some thrillers - in fact at one point I even began to wonder if Annika would end up in her normal life-threatening situation at all - but nonetheless is an entertaining read especially if you like trying to put the pieces together and solve a case as you read.

The only slight downside is that The Long Shadow feels very much like the sequel, even the second half, of a story line that started in Lifetime. It definitely gives spoilers for the previous book and although I don't find that too off-putting (I've read other Annika Bengtzon stories out of sequence) I know it will upset some readers.

from Amazon
Posted by maryom at 09:37