What Are You Playing At by Marie-Sabine Roger 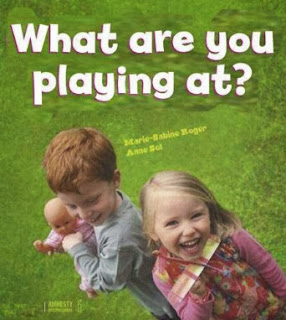 When children play, many parents find themselves uncomfortable if they play the "wrong" games and they persuade them to play something more 'gender correct'. This is done so the parent feels more comfortable - not for the child at all.

This book takes many of those common situations and brings them forward to adulthood - through pictures and short strong messages - with each role expanding into a role that any parent would be proud to see their children doing.

Yes, there are young girls playing football and then showing that woman do play very serious international football but there are also those boys playing with dolls expanding into a role I have had the pleasure, nay - honour, to have played twice as father to our two wonderful daughters.

As a lift the flap book it adds appeal to young fingers although it has an important role in being shared with their parents so they can be comfortable with their child's play.

A lovely book with an important message for parents and it is being published on Universal Children's Day - 20th November 2013.

Buy What Are You Playing At?