Rags and Bones edited by Melissa Marr and Tim Pratt 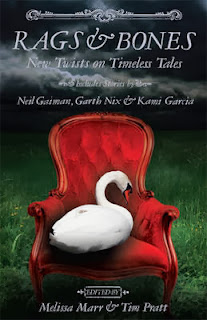 Subtitled New Twists on Timeless Tales, this collection takes a new look at twelve old and perhaps familiar stories. The editors approached some of their favourite writers, asking them to revisit stories that had inspired or moved them and re-work them from their essential 'rags and bones'. So there are new versions of fairy tales such as Sleeping Beauty and Rumplestiltskin, and of classic tales from Spenser's The Faerie Queene to Sheridan Le Fanu's vampire Carmilla and Kipling's The Man Who Would Be King; there's science fiction, dystopian and fantasy, in fact a little of everything.
This book arrived unexpectedly for review but I immediately marked it down as a 'must read' - and it didn't disappoint; in fact, with its mix of literary and genre, it proved to be one of the most compelling collections I've read. You might be drawn in by the big names - Neil Gaiman and Garth Nix - but all the stories are quite wonderful. Anyone who loves fantasy will be drawn in and mesmerised and for anyone who thinks 'genre' isn't their kind of thing, bare in mind that some of these stories are based on ones from literary heavyweights such as Henry James, Nathaniel Hawthorne and EM Forster and give them a go.

from Amazon
Posted by maryom at 11:04