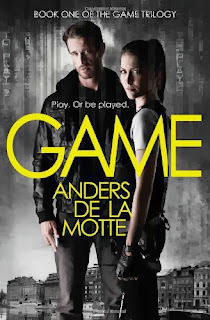 Henrik Petterson - HP to his friends - is a bit of a drug-taking, petty criminal sort of low life, so when he finds a shiny new phone his first thought is to turn it into some ready cash. Then he sees the message that keeps flashing up - "Wanna play a game?" Thinking he's being challenged by a mate, he plays along, stealing an umbrella. Then he realises there's more - a web-site devoted to The Game, cool video clips of his actions, praise from other Gamers and cash rewards. HP is easily hooked; it's more exciting than any computer game he's played! At first the tasks are more like pranks - a bit of spray-painting, the stopping of a public clock - but HP soon finds things becoming increasingly dangerous, for both himself and the victim. Getting out of the Game though could be as life-threatening as staying in, and once HP starts to see conspiracy plots, there's no end to them... 9/11? the murder of Swedish PM Olof Palme? and of course the big one, who killed Kennedy?

The Game is like a book version of all my favourite conspiracy-theory movies, from Z to JFK to Enemy of the State rolled into one with some added Die Hard-style action (and language) - so what's not to love about it? It's an excellently-written, rattling good read - and I gobbled up every page of it. The reader is there with HP every nerve-tingling, adrenalin-filled step of the way, can share his initial excitement and thrill at taking part, then his growing unease as events take a serious turn. HP isn't the most instantly charming of heroes but I soon warmed to him.Yes, his language is at times strong but it felt right and fitting for his character.

The plot is shared between sleazy HP and his conscientious sister, Becca, a policewoman with the prestigious bodyguard division - an ill-matched pair with an intriguing back story that unfolds along with the main action - both story-lines keeping their secrets till the very end. The reader isn't abandoned on a cliff-hanger finale but is left with a tantalising glimpse of what may come next... fortunately all three books of the trilogy are already published, so I don't have to wait months before the next instalment.

A thriller that conspiracy-theorists everywhere will love - and one that will alert everyone else to the hidden currents behind world events.

from Amazon
Posted by maryom at 11:54