The Letter for the King by Tonke Dragt 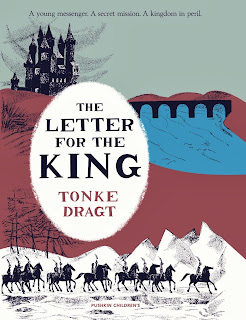 Five young men are going to be knighted by the King but first they must spend the night at a chapel outside the city walls, neither sleeping nor speaking but reflecting and praying for strength to acquit themselves as knights. They have locked the door behind them and it won't be opened till the King sends his knights for them in the morning, but in the middle of the night, the thoughts and contemplations of one of their number are disturbed. Tiuri, the youngest of the knights-in-waiting hears a noise at the door - someone asking for help. The other young men ignore the desperate whisper but Tiuri feels he can't. A knight is supposed to aid those in distress, isn't he? So against all the rules, he opens the door and goes to help. Before long he's setting off on a perilous journey, far beyond the land he knows, through dark forests and over precipitous mountains, to the neighbouring kingdom of Unauwen bearing a secret message that must only be delivered to the King himself.

Tales of knights and their quests are endlessly appealing and this is a story that will enthral children of all ages being action packed but not overtly violent - younger ones will wait with bated breath as it's read to them, their older siblings will carry on reading long after 'lights out'. Tiuri's adventures are many and varied - through unknown forests and over high mountain passes, pursued by enemies who would kill him to stop the letter getting through, but finding help when he least expects it. Of course, it isn't always possible to spot friend from foe at first sight..... Through out it all Tiuri tries his best to live up to the knightly expectations of honour, bravery and loyalty to friends and the King.

The Letter for the King is a Dutch classic tale, first published 50 years ago, but now translated into English for the first time and bound to make lots of new fans.

Buy The Letter for the King

from Amazon
Posted by maryom at 09:55