A Country Road, A Tree by Jo Baker 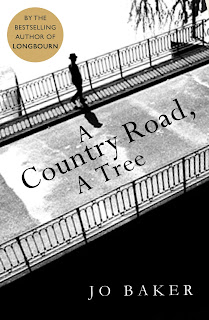 In September 1939, Samuel Beckett is an unknown writer, visiting his mother in Dublin and faced with a choice - to return to Paris and his partner Suzanne, or sit the coming war out in safety at home in Ireland. The atmosphere at home is too stifling and restrictive, and staying there feels too much like taking the coward's way out, so he heads back to France. Here, too, there are choices to be made. As the citizen of a neutral country, Beckett could theoretically keep himself to himself, not make a fuss, and wait for the war to be over, but his moral and political leanings won't allow him to sit idly by...

One thing to get straight right from the start is that this isn't an all-action story of daring deeds and shoot-outs between the Resistance and occupying German forces. It's more a story of choices - to keep quiet but safe, or follow one's conscience, probably into danger - and of the day-to-day terror that almost anyone in occupied France must have lived with, especially Resistance members and sympathisers - the knock on the door in the middle of the night, the telegram which says a friend has been arrested, the warning to flee. At the same time, Beckett is growing as a writer, moving out from the shadow of his mentor, James Joyce, so, although the characters are adults, in some ways it can almost be seen as a coming-of-age novel.

As with Jo Baker's Longbourn, there's a feeling that the story is of people standing on the side-lines; in Longbourn's case, she told the story of the servants of Austen's Pride and Prejudice households; this time it's of private individuals, involved against their will in a war, and not even part of the massive armies sweeping across Europe, Africa and Asia at the time; others may be caught up in that whirlwind, the ones we're concerned with are on the periphery.

I love Baker's writing style, even though I find it difficult to describe. She takes small, intimate moments, creates a mood in which the reader can almost experience the same sights, smells, and emotions as the characters, then links these moments to advance the story. From a boy hiding in a tree to evade his mother, to a train packed beyond 'full' with people fleeing Paris, to trying to hide a case of explosives under a display of geraniums, the reader is there in the moment.


The publisher's blurb merely talks of 'a young writer', and it was only a couple of chapters in, with mention of translating 'Murphy', that I realised this writer was Samuel Beckett; someone I have mixed feelings about. I was introduced to his writing at A level via Malone Dies - and I'm not sure it was something I was ready for; it seemed dull, rambling, disjointed, and not at all what I expected from a novel. I always had him rather marked down as an odd, dull guy, obsessed with finding the exact word to express his meaning, dwelling on thoughts and ideas rather than the sweeping plot-driven work of Hardy or Lawrence (also on the A level syllabus). So, to be honest, I'm surprised to find him such an interesting guy after all. I loved Longbourn, and I loved this. Now I wonder if I re-read Samuel Beckett would I love his work too? It's certainly made me reassess my thoughts about him as a man if not a writer.