The Butterfly Summer by Harriet Evans 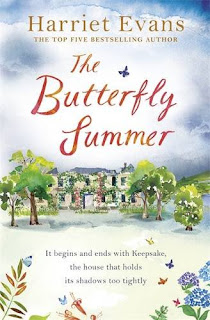 Nina Parr's father died on an Amazon expedition when she was only a few months old so she has grown up knowing little of him and nothing of his family. Then a chance encounter makes her begin to question everything. An elderly woman insists she recognises Nina, claims she knows her family and that Nina is the heir to Keepsake, an ancient country house surrounded in mystery. Nina's at an awkward point in her life - drifting along, stuck in a dead-end job, divorced for two years but still attracted to her ex - and she feels that following up these hints of a family she's never known will help her 'discover' herself and move on.
Alongside Nina's story runs that of her grandmother Teddy. Brought up as the future owner of Keepsake, she wants nothing more than to leave it and all it stands for.

The Butterfly Summer is a combination of family saga and personal discovery; the two playing out alternately, as the reader follows Nina in the present day, and Teddy in the 1930s. I loved the way this story started - the intrigue of a hidden family history, the hints of something very like a family curse, and the mystery of an old house buried deep in the Cornish countryside, all added up to something Daphne du Maurier might have written. But whereas I found Nina an interesting character whose story continued to hold me throughout, I soon grew to dislike Teddy, for being too self-centred, too immersed in her illicit love affair at the expense of others, and her tale actually became rather predictable.
As the two stories unfold there are, perhaps necessarily, several big plot twists. Now, for such a twist to be believable, there has to be a certain amount of forewarning in the way of hints that the reader might or might not pick up on, but (and perhaps blame it on reading too many crime novels) in this case I found that the clues were so obvious that some of the 'twists' came as no surprise.