The Radleys by Matt Haig - re-read 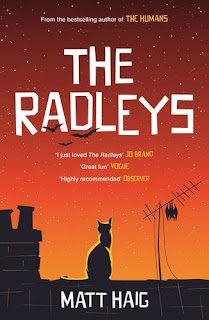 To the casual observer, the Radleys appear to be as normal as any of their neighbours in the pretty commuter-belt village of Bishopthorpe. But if they're that normal, then why do they always walk down the shady side of the street, carefully avoid the slightest hint of garlic, and prefer their meat barely cooked? Why can teenage son Rowan never get to sleep at night? and why is it a really bad idea that daughter Clara has become vegan? ...
Helen and Peter Radley, though, have been hiding a secret, even from their own children - the fact that they are vampires, abstaining ones who never drink blood or kill, but still, at heart, vampires. Clara is about to discover this in a dreadful way; pushed too far by the amorous advances of a drunken bully, her instincts kick in, with horrific, bloody results. Peter's immediate response is to phone his brother Will to come and sort things out - but Will is a practising vampire, addicted to increasingly dangerous kills and more likely to be bring trouble to their doorstep than offer help.

I loved this book when I first read it a few years ago, so given the chance to vote for it as a book club read I did! I have to admit, I wondered if it would seem as absorbing a second time round - but it definitely did.
It isn't anything like the Twilight novels or an old Bela Lugosi film but, I feel, about an average family with an inherited 'disability'. For anyone who's seen Being Human, there are certain similarities in the situation, (Will definitely has a touch of Aidan Turner's smouldering appeal) though in this case there are no werewolves or ghosts, just a family of vampires trying to live as normal a life as possible. I think part of its continued appeal is that it isn't JUST about vampires. The Radleys may only be acting the part of a normal family, but many of their problems are faced by normal families too. Quietly married with teenage children, both parents feel hankerings for the heady, youthful days of the past; Peter contemplates an affair with a neighbour, Helen dreams of a long ago romantic fling. Will with his vampire lifestyle represents all that they've given up - he darts about all over the world, parties long and hard all night, lives life in a way that seems fuller and more exciting than their middle-class, middle-age life of dinner parties and book clubs.
Also, like any parents, the Radleys want to shield their children from the unpleasant side of life - in their case, the fact that they are vampires  - and from the consequences of a youthful 'slip-up'. Wouldn't any parent behave the same?
It's also funny - not necessarily laugh-out loud hilarity but a quiet, wry observation of family life. So, yes, it's about vampires, but also about that average family that they're trying so hard to be.