Carrying The Fire by Michael Collins 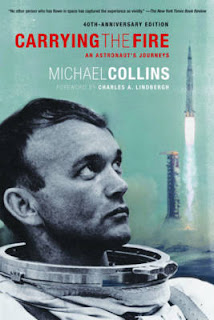 Subtitled "an astronauts journeys" this book is an autobiographical retelling of Michael Collins' flights on Gemini 10 and Apollo 11. Yes, he is the forgotten one, the one whose vital role aboard the command module enabled the first 2 men on the moon (Armstrong and Aldrin) to return to earth after their so historic event.

As a teenager I read and watched everything I could find on the space programs (both American and Russian) - not because I wanted to be an astronaut but because I was fascinated by the engineering achievements that were being made and the leaps forward that were happening.

Collins wrote this account in 1974 at a time when the last Apollo flights had been cancelled, 3 Skylab missions had been flown, the historic rendezvous with Russian Cosmonauts was in the planning and the space shuttle was far from ready. Despite all this I missed this book the first time round and my eldest daughter bought me this for my birthday this year and wrote in a dedication of "To Dad, Love you all the way to the moon, orbit, and back" which I think is lovely but there ought to be an 's' on 'orbit'.

Collins starts the story from his moving to Edwards Air Force Flight Test Centre and hearing about the astronaut program. From here he tells his story with reflections upon his life before.  My only regret with this book is not having read it sooner - like 1974! As a teenager I was fascinated by the technology but did read a few biographies (which, outside of scifi, was the only other genre of books I really read!). Here Collins not only puts men in the rockets, something I obviously knew but didn't really think about, but he actually brings them to life.

Written without a ghost writer it is all his own words (although what editing went on I don't know) and he really can express himself. During his first EVA on Gemini 10 I was genuinely worried for him - which is stupid because we all knew he would return to fly Apollo 11 - and when it came time for his second EVA on the same flight I was hoping it was going to be cancelled! But then I am not a test pilot and would never have wanted to be one. He readily admits to not taking time to stare at the wonders of space but focusing on the mission until time slots presented themselves but when he did look around he describes the sights with hardly an adjective but somehow makes them all the more wondrous for it. At times he seems to worry, as a writer, that he has explained himself enough, for example with reference to seeing the earth from space versus seeing a photograph but he needn't worry because he really makes the point well.

Sometimes 'autobiographies', when ghost written, can make you wonder if the subject is the one you read about but autobiographies without ghosts are generally different - you can get to like the writer or even dislike the writer. I recently read a book on Chris Froome and thought the guy a genuinely nice guy - and I suspect he is - but is that just the guy that David Walsh (the ghost)  knows? I read a  book by a member of one of the shuttle crews and decided, while it was an interesting book, I didn't like the author. Here? Well here is a guy that I would genuinely like to "High Five" and that is rare for me. I don't high five anyone - normally.

I would recommend this book HIGHLY to anyone with the slightest interest in the space program.

Anyway, we try to keep these reviews not too wordy and I've said too much. If you like autobiographies or the space program then read this one - PLEASE. It was republished for its 40th anniversary.