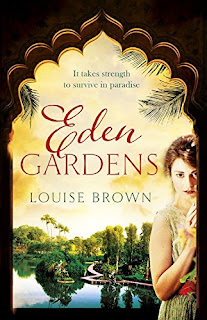 In a tumble down old house, in a poor part of Calcutta, live Maisy, her Mam, and their servant, Pushpa. Mam's dreams of marrying into riches among the British rulers of India haven't worked out, and particularly since the death of her husband, the family has fallen into poverty. To make ends meet, Mam 'entertains' a series of gentlemen friends, while planning that Maisy will be the one to mend their fortunes through an advantageous match.
Maisy has other ideas though. To her mother's dismay as a child she loved to explore the streets and bazaars of the 'Indian' side of town with Pushpa, as a teenager she falls in love with Sunil Banerjee, the son of her tutor, and a supporter of the Quit India movement. As the Second World War breaks out, and the end of the British Raj looks in sight,  Mam's hopes and dreams begin to crumble ... but she still is determined to shape Maisy's future.

To be honest when this book first arrived for review, I didn't think it was going to be my kind of read - but, out of curiosity, I read a few reviews here and there, decided to give it a go, and found I rather liked it!

The story unfolds from two very different perspectives - that of Maisy and Pushpa - which gives a nicely balanced, and sometimes very different, view of both the background and unfolding events. Maisy's starts out as a child's eye view of the world - of her mother's drinking, relationships with a variety of men, the happier times when her father was still alive, the hustle and bustle of the crowded streets; Pushpa's view is far more realistic and down to earth; her life hasn't been easy, and working for Maisy's family offers her a degree of security she's not had before. She's also privy to the secrets behind Maisy's parents' marriage but as a loyal servant is willing to keep them. the only drawback was that both accounts seem to be written at some pint far in the future, and the immediacy of events occasionally seems dimmed by time. The novel is set against the backdrop of World War Two and the upheaval that came with the creation of an independent India but these political events seem merely that - a backdrop. Pushpa is more affected by them but for Maisy and her mam they just seem a trifling inconvenience.
As Maisy grew up though, I came to care for her less and less. She seemed too willing to drift along with her Mam's plans, instead of striking out on her own, as I would have liked her to do. Even though it turned out more 'romantic' that I'd usually read, I did enjoy it.