The Wolf Road by Beth Lewis 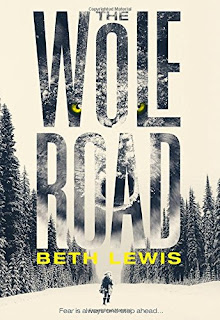 With her parents having gone north looking to make their fortune in a new gold rush, and her grandmother dead in a freak storm, Elka has been brought up by a man she knows only as Trapper. Theirs is a harsh isolated life in the forests of post-apocalypse north-west Canada, but Elka quickly adapts and learns the skills necessary to survive - trapping and hunting wild animals, skinning them, curing and preserving the meat - and now in her seventeenth year, Elka is as proficient as her mentor. Then, on a rare trip into the nearest town, she sees a poster, with Trapper's picture on it; his real name is Kreagar Hallett, he's wanted for murder, and, by association, so is Elka.
Her first instinct is to get away, so Elka sets out to journey north to the place her parents had headed for, but gradually she realises that the only way she herself can escape the law, is to hand Trapper over to it.

I think the Wold Road must be the most original book I've read this year - admittedly the basic synopsis of an outsider heading off on a quest-type journey in search of 'home' is not new in itself but the atmosphere, the post-apocalyptic setting, and Elka herself make this a story that stands out from the rest.

The events take place in an alternative 'present day', in which the north of Canada has been laid waste in a (presumably) nuclear war which Elka refers to as the 'Big Stupid' and seems to have taken place sometime during the Reagan/Thatcher era. Civilisation in this corner of the world has retreated to the edges of the vast untamed forests, with small towns scattered here and there acting rather like frontier-settling trading posts. This atmosphere, plus elements such as the wanted posters and a sheriff-style Magistrate, gives the story a gun-slinging 'western' feel, so much so that I envisioned characters dressed accordingly - as ranch hands, trappers and saloon girls. On the other hand, as Elka travels north she encounters devastation that can only have been caused by modern warfare - poisoned lakes, and huge swathes of land completely flattened.

The story is narrated by Elka, in a highly individual voice (though again there's maybe an echo of John Wayne cowboys in there) with every page conveying her strong self-reliance and no-nonsense attitude about the necessities of survival. Her prologue sets the underlying sense of unease, and, as her trek continues, the reader, along with Elka, gradually is brought face to face with the enormity of Trapper's actions. Despite her probable involvement in what he's done, I still wanted Elka's story to have a happy ending; a reunion with her parents, a deal with the magistrate, and a new start; the author wasn't that forgiving ...

I completely loved it though. It's an excellent mix of a lot of things I enjoy in a read, and to make it better, has a strong female 'cast' - even the soft 'townie' proves to have her strengths, even if they are different to Elka's. As you expect on a quest, there are dangers to be faced, both from nature and from mankind, people who talk nice but act mean, companions to help along the way and plenty of new trouble for Elka to land herself in.

It isn't for the squeamish - for Elka, killing and preparing your dinner is more normal than opening a can, so at times she's a little too detailed maybe in how she goes about it - but fans of Bear Grylls and his wilderness survival programmes will love it.

And if I haven't tempted you enough, you can read the first chapter here on Beth Lewis' website