The Museum of You by Carys Bray 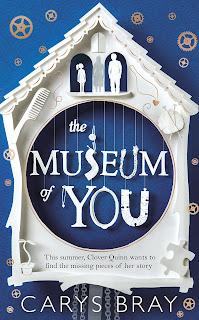 Her mother, Becky, died shortly after Clover was born, and there is so much about her that Clover doesn't know.  Although he's done his best to be both father and mother to Clover, her dad, Darren, has always been reluctant to talk about Becky. Encouraged by his friends, he's tried to move on with life, but the spare room is still full of things he intends to clear out - and in there Clover believes are clues to her mother's life, to who she really was. So this summer, the first she's been allowed to spend time at home alone, Clover intends to sort through the boxes and rubbish bags, organise the things she feels are worth keeping, and create a museum of her mother.
Darren meanwhile is fully immersed in his role of father. He tries to pre-empt all Clover's needs, from pencil cases for school, to treats to cheer her on sad days, to venturing into a bookshop to buy a book on being a woman. He's kind, caring and takes his responsibility as parent far more seriously than many do.

In this her second novel, Carys Bray again explores the relationships within a family coping with loss. Told from the alternating perspectives of Clover and Darren,The Museum of You builds a picture of a close loving father/daughter relationship which sadly still has a hole at its heart - the void left by Becky's death. Again, the family unit plays an important part in the story - but this isn't a standard 'Mum, Dad, two kids' family, but instead a looser structure with Darren and Clover at its centre and an extended family surrounding them - Darren's own rather withdrawn father, his best friend Colin, Becky's brother Jim, elderly neighbour, grandmother-substitute Mrs Mackerel, and potential girlfriend Kelly and her two boisterous boys.
In the re-tellings of her family history, Clover's birth has always been described as a surprise - and surprises come in two kinds - the good and the bad. Darren's life seems to have been filled with the latter - disrupting first the ambitious plans he had as a teenager, then the future he imagined with Becky - but even so he's kept a certain level of cheerfulness about him, whereas another man might have turned bitter and resentful. His kindness shines through in so many ways but especially in his thoughtfulness in looking after Clover and the way he's taken on the extra responsibility of caring for Becky's troubled brother Jim. At times I found myself smiling at Darren's over-eagerness to be the perfect dad, but it was always fondly and with an admiration for his efforts.
Clover herself is an independent twelve year old, seeming at times wiser than her years but still quaintly child-like in the way she goes about setting up her 'museum' and her misinterpretation of the things she chooses as exhibits.
Both were characters I grew to sympathise with and care for. The author captures the tiny details of their days - the tending of the allotment, the route Darren drives on his bus, their joint ritual of finding three happy things in each day - and brings them to life, almost ready to walk off the page.

A Song for Issy Bradley was one of my picks of the year when it came out, and I'd wondered how anyone would follow such a wonderful book, but Carys Bray has! The Museum of You is tender and compassionate, will make you laugh, maybe bring you to tears, and will have you rooting for Clover and Darren, hoping they can both find happiness and sense of completeness. In short, an absolute joy to read.