Kiss of Death by Peter Beere 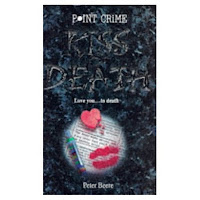 Do we understand it all?
Review by The Mole

Sadie Ross is all alone. Her mother is dead and her boyfriend has left her. All that she touches seems to shrivel and die. Sadie has the kiss of death... but when she meets Tony, Sadie's Luck seems to change - perhaps life and love have not passed her by...

Until the murders start... is there anyone she can turn to before she becomes the next victim?

It is difficult to say much about this book without giving plot spoilers. It was an easy read but an experience like one I have not had before. Told from Sadie's point of view but it is very difficult to get to understand her - but this is not because it is badly written, but quite the opposite it is very well written but Sadie is a teenager that has had a lot of things happen to her and she is lost, alone and very sad. But is she paranoid as well?

An extremely entertaining book aimed at teenagers but having finished reading I was left wondering "Did that explain it all? Is there more unsaid?".

Unfortunately there aren't many new versions of this around now as it was first published in 1994 and our library service lists it but has lost it (someone ought to return it?). Non the less well worth a read if you can get your hands on a copy.