Playground by 50 Cent with Laura Moser 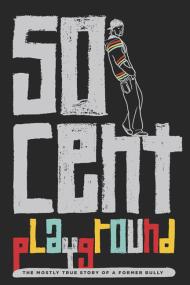 "Mostly True"
Review by The Mole

Butterball's parents have split and he is living in the non-fashionable Garden City with his mum rather than in the trendy New York with his dad. He has changed school and only has one friend who one day he turns on and beats up. After this he must see a therapist or be expelled.

We follow the story of Butterball as he goes through therapy but still gets into more trouble and starts to regret some of his past. In fact, regrets much of his past.

Ok, the telling... At a couple of points it feels like there is a little hero worship involved and wonder if there is something of the co-writer coming through? Something I am not sure about though is the reading age.... Normally a book about a 13/14 year old boy is aimed at 11+ but this book has language (not profanity although 'sh*t' is thrown in liberally through out the book) and concepts that just don't seem right for a young teenager - things that might be learned and understood retrospectively in later life.

Having made those minor comments, it doesn't detract from the fact that this book is 'mostly true' and a heart warming story for it. Clearly the book is not a transcript of the sessions and it is easy to say that as a work of fiction this just would not have happened. It did - and it's important to bear that in mind.

So it's target audience? Well 50 Cent says it's an anti bullying book and this it most certainly is but are bullies likely to read it? Sadly not many will simply because such people tend not to read a great deal because it's not 'cool' but perhaps the name on the front cover may just get some reading it and thinking about it. Or maybe victims or family will and hopefully 50 Cent's intention will be realised. But I wonder how many copies will be bought as presents for fans and go unread?

It is well worth a read and is easily readable.
Posted by The Mole at 09:00