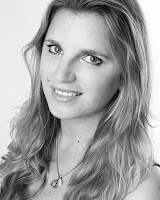 Emylia Hall's Book Of Summers,"It's such a beautiful evocation of hot, lazy summer days", published on 1st March 2012 and she kindly agreed to do a guest post where she talks about the inspiration and ambitions of her first novel.

How does a book begin? Somewhere there’s a floppy disk, last modified in 2003, with a few messily conceived paragraphs that sketched out an idea for a story; one about memory, complicated family relationships and the pull that a country can have over a person. I was working in a hectic London advertising agency at the time, an all-consuming job that left no time for anything else, and so I hit ‘save’ and got back to my real life, soon forgetting about the fictional one I’d toyed with creating. Four years later, when at last I returned to the story, I couldn’t find the disk. Thankfully, the basic idea was still rooted in the back of my mind. Something about it wouldn’t let go.

But it had taken me a while to get there. In 2005 I’d quit my job, spending two penniless winters in the French Alps and exulting in new-found freedoms. While there, I wrote 100,000 words of a quite different novel, one that was only ever destined for the desk drawer. When I finally sat down to work on The Book of Summers, I knew that regardless of whether it ended up being published or not, I would delight in the process of its creation. My ditched ‘first’ novel had been an adventure in writing, and it’d taught me that unless you believe wholeheartedly in the story you’re telling - if you weren’t prepared to hold it up and say ‘I did this’, and it be, perhaps, the only book you’d ever write - then you were getting it wrong. You never have a second chance to write a first novel (of the published variety that is, heaving desk drawers are quite another thing). The Book of Summers – with the girl, the family, the country, the blissful childhood summers, the ache of memory, the sorrow of regret – felt right. I wanted it to be my first.

Slowly over the course of nearly four years, with plenty of wrong turnings and lessons learned, the book came alive. As I wrote, I revisited the landscapes of my childhood. I basked in the days that I thought had fallen to time, possessing them again in a way I’d never thought possible. And I wove great threads of fiction in and around the facts, thrilling in the creation of something new and the habitation of a world of my own making.  In the song ‘Passing Afternoon’ by Iron and Wine, there’s the line, ‘There are things that drift away, like our endless numbered days.’ For me, writing is a way of catching the things that drift, and holding on to them just long enough to set them down on paper. Knowing that, one day, maybe, someone else will read them too. For The Book of Summers, that day is today.