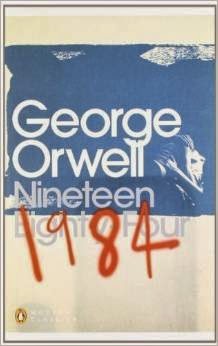 review (or ramblings) by Maryom

"Hidden away in the Record Department of the sprawling Ministry of Truth, Winston Smith skilfully rewrites the past to suit the needs of the Party. Yet he inwardly rebels against the totalitarian world he lives in, which demands absolute obedience and controls him through the all-seeing telescreens and the watchful eye of Big Brother, symbolic head of the Party. In his longing for truth and liberty, Smith begins a secret love affair with a fellow-worker Julia, but soon discovers the true price of freedom is betrayal."

We all know - or think we know - George Orwell's 1984; the story of dull office worker Winston Smith who rebels against The Party and ends up in Room 101....with rats.....  I first read it many, many years ago as a teenager and at some point between then and now I've re read it a couple of times but my memory of it was a little vague so as it was lying around the house (daughter's A level reading) I picked it up...

I remembered a gripping dystopian novel full of tension, but this time it just seemed flat and boring - in fact my overwhelming thought was 'How dull!' For a long while, the most exciting thing to happen was the un-blocking of a drain! Left to my own devices it would easily have succumbed to the 50 page rule - if it's not grabbed me by then, I don't feel there's any point in continuing - but there was a certain amount of nagging in the form of "I've had to read it, so you should" from my daughter, so I struggled on. And to be honest, it was a struggle.
Orwell's dystopian, totalitarian future might have been shocking back in the day but it's too familiar now and lots of spy thriller or sci-fi novels have given a better portrayal of life under such a regime. Aspects have migrated into popular culture, and suffered on the way; Room 101 has become a BBC comedy programme, consigning celebrities' pet hates to oblivion; Big Brother's now a TV reality show; and parts of the torture scene seem to have been directly lifted to appear in Star Trek TNG (ep 137 Chain of Command II) where they actually appear more terrifying.
1984's main problem for me though was that none of the characters to gained my sympathy. Neither Winston nor his lover Julia appeared fully fleshed out, and I cared about neither of them; O'Brien's role seemed obvious from his first appearance, though, ok, I've read it before, but Winston must have been extraordinarily naive to trust him; the torture scenes were mild in comparison to many I've seen on TV or film; and what happened to the rats? In my memory they'd had a much larger, far more terrifying role.

My reaction would probably have been very different if I'd read this back in 1948 when it was published, and I'm sure it was different when I first read it in the 1970s but now it just seems tired and showing its age.

Not so long ago I read Yevgeny Zamyatin's  "We" , a much more engaging read, with a very similar plot and written earlier than Orwell's novel.