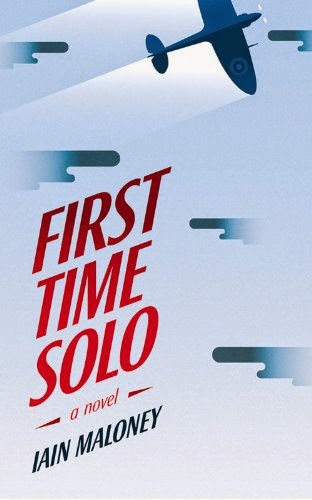 It's 1943 and Jack Devine, a farmer's son from Aberdeenshire, has been impatiently waiting his chance to join in the War. Swayed by the glamorous image of the RAF, he volunteers as a trainee pilot. After being accepted, he has to wait - a long year spent kicking his heels at home while his friends are called up for the army. Eventually he thinks his chance has come but it's more like going back to school - studying aerodynamics, engineering, maths and law, exams to pass before moving on to the next round of training, more studying, only interspersed with marching, PT and more marching. Will he ever actually get to fly?

First Time Solo shows us the WW2 from an unusual angle -  the perspective of a group of 18/19 year olds; just old enough to fight but through having chosen the RAF, held back from joining in and 'doing their bit'. Their frustration and impotence bubble through on every page, all too often bursting out in violence. The only relief comes through drinking and jazz. With his two new friends - short, pugnacious Glaswegian Joe and black-marketeer Terry with his suitcase crammed with chocolate, nylons and cigarettes - Jack sets up a jazz band but Joe's loud Communist sympathies and readiness for a fight soon threaten to pull the threesome apart.

Told in the first person from Jack's point of view, it all seems rather school-boyish at times with endless cramming for exams, skiving off cross-country running to play cards and petty animosities building between them. School-boy 'ragging' soon escalates - and they've the opportunity and means to turn it into something really nasty. Jack himself, although obviously greatly affected by events such as his brother's death and a friend's injury, tries to maintain a manly 'stiff-upper lip' and dismisses his emotions in short, curt phrases, and I sometimes wondered if a third person narration would have given greater emotional impact.

The story is based partly on the war-time experiences of the author's grandfather - watch this space as we'll have a guest post tomorrow from Iain Maloney talking about the transition from family history to fiction.

All in all an intriguing debut, one that's made its way to the short list for 2014's Not The Booker prize, and definitely an author to watch out for.