Tomorrow and Tomorrow by Thomas Sweterlitsch 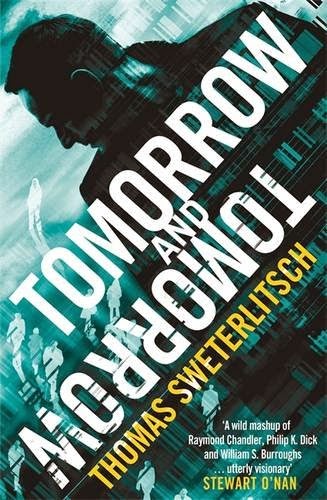 Ten years ago, Dominic lost his wife and unborn child in a nuclear blast that reduced Pittsburgh to ashes. Still unable to get over his grief, he spends as many hours as possible immersed in the Archive, a virtual re-building of the city, which enables survivors to go back in time, meet with their lost loved ones, and live through their final hours again. Another use has sprung up though, which is Dominic's other reason for spending so much time there - researching possible insurance fraud and even murder. In this way, trying to trace the movements of a missing student, he comes across tampering in the Archive, a deliberate attempt to erase all record of her. Dominic's increasingly obsessive investigations into who is doing this and why lead him onto a dangerous trail, where not only him but his memories are threatened. He's already lost his wife once, is it possible to lose her again?

For a debut novel this is an absolute stunner - I haven't been this impressed with a sci-fi novel since I first encountered Philip K Dick.

There's a double layer of dismal futuristic vision - the complete annihilation of Pittsburgh, and the dystopian porn-ridden society that Dominic accepts as the norm - coupled with a Raymond Chandler-style thriller and a moving portrayal of grief and loss.

The first thing to grab me was the world-building. The story is set in a not too distant future, a time when almost everyone has implants connecting their brain to 'Adware' - a constant streaming of news, information, adverts and reality TV style porn. It's easy to see how some of these concepts - selling TV rights to murder scene footage, shows which poll the 'hottest' corpse - are extensions of today's reality-TV obsessed culture, just merely taken a step or two further, to a point where people will do anything for their 15 minutes of fame and the cash that comes with it.

Then there's the Pittsburgh Archive - made up from CCTV, webcam footage, home videos, anything and everything to create a realistic picture of the city before it was obliterated, it gives grieving relatives the chance to go back in time and say goodbye to their loved ones. But for some, such as Dominic, it's become a dangerous obsession, a constant reminder of what they've lost, holding them in that first wave of grief and not allowing them to move on.

Dominic himself is far from the standard barely-more-than-2D sci-fi hero. He's consumed by grief, still hankering for the family and future he's lost and filled with guilt that he's survived.

Last but not least, is the thriller element, with all the twists, turns, and double-crossing you'd expect from the genre.

Each component would have been good on its own, together they're brilliant!
As I said, this is Thomas Sweterlitsch's first novel and I just hope he can produce many more such wonderful and complex stories.