A Place for Us (part 4) by Harriet Evans 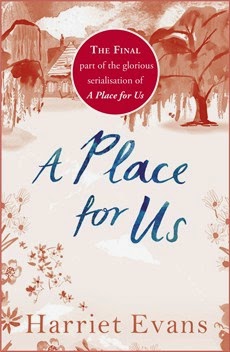 Here at last is the fourth and final part to Harriet Evans family saga, A Place For Us. Set around the Winters' family home,Winterfold, so far it's been a story of idyllic family life built on rocky foundations - and matriarch Martha's decision that the time has come to admit the truth behind the glossy image. Her devastating revelation has shaken the family to its core and left their lives in turmoil. Now it's time to heal wounds and, hopefully, move towards a happy ending.....

A Place For Us has been published as a four-part serial over the past few months. The first part set the stage for Martha's dramatic revelations with hints of the secrets she knew and the lies that the family had perpetuated over the years. Part 2 continued in a similar vein up to the bombshell that Martha drops among her unsuspecting family. Part 3 showed a family in crisis, reeling from shock, but ended with Martha freshly inspired by granddaughter Lucy's memories of an idyllic Christmas at Winterfold - memories which helped convince Martha that not everything had been a sham. Now, she's resumed her role as heart and soul of the family, and realising the distress around her, she's determined to make matters right.

I enjoyed the earlier sections immensely, getting to know the Winter family with their foibles and secretive lives, but taken on its own, part 4 wasn't such a satisfying read. Of course, by this stage, I know the family well, don't feel they can surprise me, and know how I'd like the story to end - and it did. Because of this, the path it followed seemed a little too predictable and the endings a bit too neat. I suspect if I'd read it as one whole book, with this section following directly on from the others and less time for me to think about things, I wouldn't have felt this way.

Although you can now download all four parts to your e-reader, a paperback version is being published in January 2015.