Riding the Unicorn by Paul Kearney 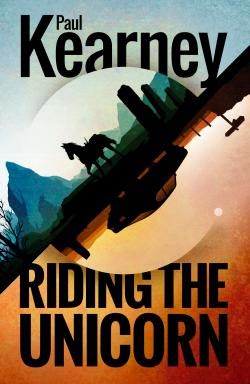 Ex-soldier turned prison guard, John Willoby thinks he's going mad. In the middle of his daily routine, he'll find himself in another world where a tribe of horsemen travel through snowy mountains and forested hillsides to set up camp by a river. For those few minutes he believes he's truly somewhere else - and then he's brought back to the 'real' world with a jolt. Could it really all be in his head? It's much more appealing than reality with its dull job, broken down marriage and hostile teenage daughter, and so tempting with its outdoor life in clean fresh countryside, that John is inclined to remain there - even if to outsiders he appears to be a gibbering drunk slumped on the pavement.
In the other world, though, is Tallimon, a king's bastard son with designs on his father's position, looking for an outsider to carry out a special task that none of his soldiers will tackle. The sorcerer Aimon believes he's found the very man for the job  - John Willoby - if only he can be brought through the barrier between worlds.

I stumbled across Riding The Unicorn completely by accident - spotting a tweeted link to a sample - and what a find! I've rather got out of the habit of reading fantasy but this could lure me back in. A lot of it reminded me of being enthralled by Alan Garner's writing as a child, but it's very much an adult scenario. In his everyday life Willoby is trying to deal with the kind of problems than many of us face - his job, marriage and fatherhood haven't lived up to his expectations. It's no wonder than another sort of life appeals to him but he's smart enough to realise that the voices he hears, and the things he sees may be just an escapist delusion. As he falls increasingly under the spell of another world, the dynamics of Willoby's home life change; his wife seems to relish in her new role as the 'strong' half of the relationship - organising appointments and his life in general - whereas his daughter finds him more approachable.

I loved this but if you're a bit dubious about 'genre' books still take a chance. It has all the qualities that a good novel must have - most importantly, a story to hook you, and characters you can believe in and care about. Meanwhile for me, Paul Kearney is an author I want to read more by, and fortunately there's a back catalogue waiting for me..