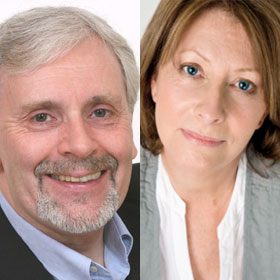 Another day, another book event - that's the joy of festivals! So on Sunday I was back at Derby Quad, in the same room where the previous day I'd seen Antonia Hodgson and SD Sykes talking about historical crime, this time to hear about contemporary crime novels from Stephen Booth and Anne Zouroudi.
Both authors have local connections but whereas Stephen Booth's long-running Cooper and Fry detective series is set in Derbyshire's Peak District, Anne Zouroudi has chosen the warmer location of Greece for her Mysteries of the Greek Detective series featuring the enigmatic Hermes Diaktoros.
Pointed in the right direction by the event's chair person, both authors told the audience how their series started out, developed and where it will go. Booth's Ben Cooper and Diane Fry first appeared as young detective constables - over 15 novels they've aged and been promoted but aren't quite keeping pace with 'real' time and could probably go on for ever. The Greek Detective series though was always envisioned as comprising seven stories representing the Seven Sins, and has now reached an end - another series based round the Ten Commandments is now being planned...
The topic of conversation managed at one point to get round to the vexed matter of e-books - are they good or bad, for reader, writers, and publishers? Both authors felt it gave them the opportunity to expand their readership, with huge numbers of books being downloaded during 'deal of the day' promotions, but that after initially discovering a new author readers might be going back to traditional 'real' books for further purchases.
This event had time for a Q+A session at the end - both authors were friendly and approachable, even when one audience member decided to leak a plot twist!
As an odd sort of birthday treat, I'd taken my neighbour along with me. She's an avid reader of crime thrillers but had only seen author events and book signings on TV's Murder She Wrote, and, knowing I go along to such things fairly frequently, she was intrigued to see what really happened. Well, no one died this time (sorry, Jessica Fletcher) but we did learn some useful tips for if we ever wanted to murder someone - and get away with it!