Lie of the Land by Michael F Russell 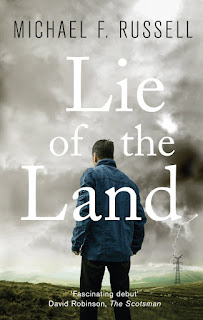 Journalist Carl Shewan arrives in the remote Scottish Highland village of Inverlair on the trail of a story about a new government device aimed at tracking and controlling people, but while he's there the system, SCOPE, goes live - with horrendous side-effects. Inverlair is one of the few safe 'not spots' outside the new system, but everyone outside is presumed dead, and there's no way of leaving Inverlair or communicating with any other possible survivors. Almost everyone within the village has lost friends and relatives on the outside, but all they can do

Set in a not-too-distant future, Lie of the Land explores what happens when you survive the apocalypse. There are no aliens or epidemics to bring it about - just careless implementation of a mind-control system (imagine an advanced version of the noises broadcast around shopping arcades to deter teenagers).
The story's a little difficult to get into as it starts several months after the activation of SCOPE, months in which the inhabitants of Inverlair have been struggling to come to terms with events, their personal losses and the greater destruction of civilisation as they know it, then it darts backwards to the events that brought Carl to Inverlair - but bear with it, as it takes a while for everything to be explained.

There are a lot of ways a post-apocalyptic novel can evolve and this isn't an action-style adventure like say 28 Days Later or Julianna Baggott's Pure trilogy, neither is there that sense of re-building civilisation as in Emily St John Mandel's Station Eleven . Life for the inhabitants of Inverlair really carries on much as it always did - there are shortages, not the least of which is of tea, but there are plenty of fish to be caught, venison and sheep on the hillsides, chickens, eggs and vegetables from local crofts, solar panels for electricity, wood for heating. There are certain power struggles within the village but nothing on a major scale. The main problems to be faced are of overwhelming grief, and maintaining the instinct to survive.

The focus of the book is Carl and his struggles to cope with guilt, responsibility and inclusiveness of village life. He's used to the anonymity of a city (and even then there's an inference that people tend to meet up more in cyber space than real life) so a small village, where everyone knows everyone else and what they've been doing, comes as a shock. He feels that the villagers hold him in some way responsible for events, and he's certainly escaped the effects of SCOPE, though more by luck than design. Trying to fit in hasn't got off to a good start as a one night stand with the hotel-owner's daughter left her pregnant ...a problem that Carl seems to hope will go away if he buries his head in the sand and ignores it!

An interesting debut, a little slow to get going maybe and definitely more about people having to cope with the unexpected events of life than the actual wiping out of civilisation, but intriguing and readable.