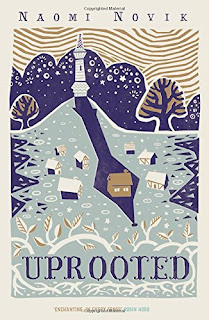 Agnieszka's village lies in a quiet peaceful valley, but overshadowed by The Wood, a corrupted place full of evil. Unwary people are snatched by it, and either never seen again or return horribly changed. Fortunately the valley is protected by a wizard known as The Dragon - he keeps The Wood and the evil within at bay, but in the way of all dragons demands a young maiden in return. Every ten years, a seventeen year old girl is chosen to live with him in his tower and this time everyone believes he will pick Kasia, the prettiest, cleverest girl in the village; no one would expect him to chose scruffy tom-boy Agnieszka - but then, who can predict what a wizard might do?
Whatever Agnieszka expectations were of life in the Dragon's tower, the reality proves to be rather dull ....until she discovers her own kind of magic, not as showy or predictable as the wizard's but just as powerful.

I haven't read anything previously by Naomi Novik so Uprooted burst on me as a wonderful surprise. Set somewhere vaguely in Eastern Europe, in places that sound very like Poland and Russia, it's a coming of age tale, a fight of good against evil, a love story, and one that encourages us to accept people no matter how different they are to ourselves.
It reads like a fairytale, with many of the traditional components - the village on the edge of deep, dark, dangerous forest peopled by malevolent beings; a young woman 'sacrificed' to the Dragon; an ugly duckling turning into a swan (if tomboy turning into powerful witch can be described that way) - bound together into a compelling, surprisingly modern, tale.
It isn't a simple straight forward case of good versus evil - because first 'evil' has to be identified, and may not lie where it was expected, and good deeds can sometimes turn out to have been really bad ideas. It was this complexity of plot and character that kept me hooked; my ideas about who the 'bad guys' were changed frequently. Folk and fairy tales often have within them a moral to be made - that it isn't always the loudest and brashest people that succeed, that kindness is often as powerful - and there's an echo of that here, though developing this point too much will give the plot away!
I like fantasy novels to have more to them than the mere casting of spells or appearance of magical creatures, and Uprooted certainly has that extra bit of grit; I loved it!