The Memory Hit by Carla Spradbery 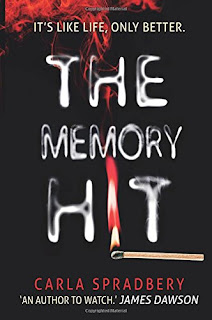 Jess thought that she and Luke were a rock-solid, together forever couple. Sure, he was a little wilder than she was, always pulling crazy stunts, but they were both on course to pass their A levels and head off to the same university to study medicine. then at a New year's Eve party Jess's world starts to fall apart. First she discovers that Luke has been cheating on her with her best friend, Scarlett. Then in Luke's jacket pocket she finds a packet of bright red tablets - the drug Nostalgex - and not just one or two, but a sizeable quantity, the amount dealers carry.
To say she's shocked is understating things - a lot - but before she has chance to confront him about either of these things, a fire breaks out. While the other party-goers escape from the building, Luke and Scarlett are trapped in a bedroom.
Jess's ex, Cooper, is also having problems with drugs. The son of convicted dealers, he's always tried to stay clear of them but now someone is forcing him, through intimidation and blackmail, into selling Nostalgex, and events take a more sinister turn when the petrol-station he works at is set alight.
This unputdownable teen thriller hinges round the puzzle of WHO would be out to kill both Luke and Cooper. Could it be the mysterious mask-wearing drug dealer known only as Whiteface? But if so, why?
Jess feels if she could only remember more details of the New Years Eve party, she might find a clue to why - and this is where the Nostalgex drug comes in. It enhances memory - very handy  for exams - and can take the user back to relive happy memories in great detail. When she tries it though, Jess discovers that often there's a discrepancy between how she remembers events and what actually occurred. Experiencing events without the emotions of the time alters her understanding of them. It helps her focus on the mysterious white-masked person at the party, but it also shows her that her relationship with Luke was not as happy as she'd believed. Revisiting some of her arguments with him, Jess comes to see Luke as domineering, bullying, even abusive - all traits she'd ignored in the past.
Like any good thriller The Memory Hit keeps you guessing about the identity of the 'bad guy',with plenty of twists and turns along the way, but what makes it stand out is the concept of Nostalgex and how our memories can be altered by time; if a person is generally seen as 'nice' we may overlook the odd outburst, or something very frightening and confusing may be blanked from our conscious memory. In a way, I suppose Nostalgex is doing what regression therapy does, and here it's used to good effect, teasing out memories and shedding new light on events and relationships.