A Slanting of the Sun by Donal Ryan 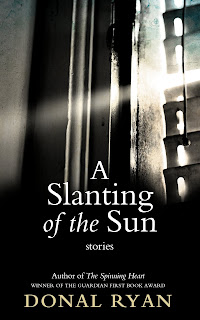 "An old man looks into the fearful eyes of a burglar left to guard him while his brother is beaten; an Irish priest in a war-torn Syrian town teaches its young men the art of hurling; the driver of a car which crashed, killing a teenage girl, forges a connection with the girl’s mother; a squad of broken friends assemble to take revenge on a rapist; a young man sets off on his morning run, reflecting on the ruins of his relationship, but all is not as it seems"

Here at last is Donal Ryan's much awaited follow-up to The Spinning Heart and The Thing About December; A Slanting of the Sun, a collection of short stories that he mentioned working on at last year's Edinburgh Book festival and which I've been looking forward to ever since.
Now, there's always a 'thing' about how to go about reviewing a story collection - do you go through each one, giving each as much review space as a novel? Skip through, outlining plots but not dwelling long on each? or treat it as a whole, just name-checking your favourite? I think the publicist's blurb above says all you need to know about the content - so I'm going for the over-view.

First off, it's best to make clear that these aren't the cheeriest of stories; presumably like Tolstoy's families, happy stories are all alike, it's the unhappy ones that have the tale to tell! The mood is generally reflective, and often heart-wringingly sad - so much so that, four or five stories in, I was tweeting about being "wrung out like a dishcloth". For make no mistake, there's an emotional roller-coaster waiting for you inside these pages.

The characters themselves seem, on the outside, to be a pretty normal, almost nondescript, bunch - folk you could pass in the street any day and never remark upon, but, as Atticus Finch says in To Kill A Mocking Bird, "you never really know a man until you stand in his shoes and walk around in them". This is Ryan's gift, to put himself in someone else's shoes, get inside his character's head, and then pull the reader along with him - making us feel the hope, pain, remorse and regret. Happiness, for there is some in among the anguish, generally seems to be confined to some distant past, a golden moment, lit up as the slanting sunbeam illuminates a room, but which faded quickly away, leaving the rest of life feeling dull in comparison.

The style of telling is quiet and undramatic, like one person quietly chatting to another over a coffee or a pint down the pub - but the tales they have to tell will knock you sideways!

I said I'd mention my favourite - the last, A Slanting of the Sun, which ends on a note of forgiveness and reconciliation.

If you want something fun and light, that will make you laugh out loud - go elsewhere.
If you want a read that will move you, maybe shock you, make you stop and look twice at your neighbours and wonder what makes them 'tick', let you experience emotions that I hope would never befall you in real life, this is the one to choose.


I have a feeling gleaned from fellow-bloggers, than while well known in Eire, Donal Ryan isn't as widely appreciated this side of the Irish Sea - he should be!