The Door That Led To Where by Sally Gardner 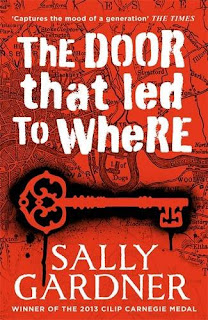 AJ has left school with just one GCSE and isn't expecting to find work anywhere, so he thinks he's struck lucky when he gets a job at the Gray's Inn law-firm that used to employ his mum. He doesn't realise the full extent of his luck though, for he's about to discover something that will change his life - a key that will take him back in time to London in 1830, and lead to a series of murders spanning both time-periods, and the unravelling of the mystery surrounding his father.
Meanwhile in modern London, AJ's mates Leon and Slim have their own troubles, with police, drug dealers and gang leaders looking for them - maybe AJ's key could offer them a hiding place in a safer world, and maybe even a new start?

Now ok, this is meant to be a teen/YA read but I don't care, it had me absolutely hooked from page one! It's a slippery, twisty sort of plot with time travel, a murder mystery, the clearing up of a forgery case, and the tiniest bit of romance - added together they make a brilliant, compelling read.
Told in the third person, but from AJ's point of view, it captures the sort of language and words that you'd expect from a modern teenager (though maybe edited for swearing!) and lets the reader slip right into the action. The action is fast-paced but with time enough to let the atmosphere of early nineteenth century London seep through. Despite the lack of mod-cons - from mobile phones to proper toilets - all three young men appreciate the charm of London before high-rise developments and the promise that it holds for them; unlike the present day, which has them labelled and written-off as 'teens in hoodies'.
I particularly liked the friendship between AJ, Slim and Leon. It's often seen as cool to be tough and uncaring but these three share an unbreakable bond; none seem to have family to care for them so they look out for each other and are there to help when things get tough - it's good to have friends like that!

All in all this is a riveting read that fits such a lot of genres that it must almost suit everyone. The only puzzle I was left with was - which time would I have chosen to remain in? Today with all its conveniences or 1830 with a more leisurely paced life but decidedly dodgy hygiene?