Circling the Sun by Paula McLain 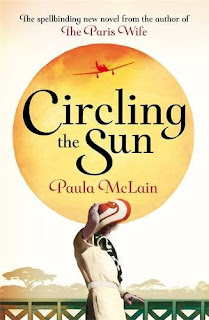 Beryl Markham is perhaps best known as an aviator; she was the first woman to fly across the Atlantic from east to west - a feat accomplished in September 1936 - but even before that she'd lived an extraordinary life. While she was still a small child, her parents moved to Kenya and she grew up there, almost wild, playing and hunting with the local children in the bush, till she was bundled off to boarding school. She married young, had several society-shocking affairs, and a second marriage, became the youngest, and first female, licensed horse trainer in Kenya, having considerable success at prestigious races in Nairobi, then, through big-game hunter Denys Finch Hatton, discovered flying - all of this at a startlingly early age.
So what was the woman behind the headlines actually like? In a long flashback from the cockpit of Beryl's aeroplane high above the Atlantic, Paula McLain explores the life of this remarkable woman, and tries to find out what drove her to achieve so much, from her lonely childhood to her troubled adult years.

There's a lot of Kenya that feels familiar from other sources - Beryl moved in the same 'set' as Karen Blixen (author Isak Dinesen) and Denys Finch Hatton (both known through the film Out of Africa based on Blixen's writing), and the drinking, drug-taking, racing, high living crowd of "Happy Valley" (brought to life in the film White Mischief) - and sometimes the incidents Beryl recalls were ones I'd heard before, although from a different angle. Something that shone through in many places was the beauty of the country - its huge empty spaces, rolling hills and acres of pasture which the author conjures admirably.


Overall though I felt the story read more like a straight biography than fiction. There was a little too much "tell", not "show", for my liking - I didn't really feel Beryl's character come to life and I was left feeling a little outside it all, not sharing Beryl's thoughts and emotions.