The Machinery by Gerrard Cowan 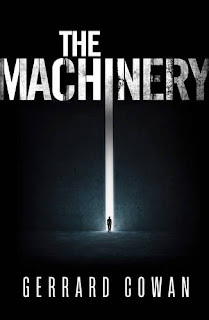 For 10,000 years the life of the Overlanders has been run, almost ruled, by The Machinery. The Machinery, run by The Operator, is an integral part of their lives and it selects their leaders and sets their path. Over the 10,000 years they have slowly expanded to take over the entire Plateau and are on the verge of expansion beyond their shores. But there was a prophecy that The Machinery would break down in the 10,000th year and the One would come and bring ruin with them. It is the 10,000th year and the Strategist Kane has died in mysterious circumstances and a new leader must be selected. Is this an omen or a ploy to demoralise the citizens?

Some years earlier Katrina Paprissi witnessed The Operator, Jandell, - and inventor of The Machinery - kidnap her brother, Alexander, and now -in the 10,000th year someone has set a breadcrumb trail for her to follow that will lead her to her brother.

As I read this book I kept wondering where it was going to go and I feel this spoiled my enjoyment - I had failed to realise that this is part one of a trilogy, in fact I only realised this in the acknowledgements at the end of the book. When you know it's a series then you don't expect the ends to tie up nicely - and here we are left almost on a cliff hanger.

It felt, throughout, that it was going to become a steampunk novel but always just hung in the balance. While The Machinery, and a seemingly complex structure of Strategist, Tacticians and Watchers, rule their lives, the most "advanced" technology they have acquired is cannon - and that was not all their own efforts!

We switched between characters from all sides of the story and Cowan manages to convince us, in his own way, that they are all 'good guys' because everyone seems to do despicable things. The only way to understand which side to root for is to carry on reading the next book in the series - but will we learn then?

Time and again we are introduced to strong confident characters who we can take as an anchor within the plot only to have them portrayed in a more open and vulnerable light.

When we meet Shirka then things start to change rapidly, death and mayhem follow - but not, I stress, at Shirkra's hands - and the previously established order that we have been following, understanding, and becoming embroiled in, suddenly starts to transform completely.

This is going to be a series that must be read in order so now is the time to get started.

A great read that is perhaps more fantasy than anything but may well also appeal to steampunk fans. The second book, The Strategist, comes out in May 2016.