The Shoeshine Killer by Marianne Wheelaghan 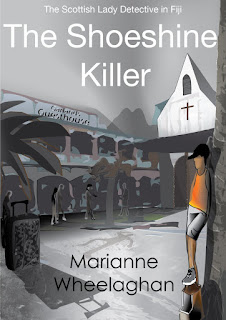 This second in the Scottish Lady Detective series, sees Louisa Townsend in Fiji for a police conference - but getting mixed up with murder. When a new acquaintance is killed, Louisa isn't convinced the local police are asking the right questions so wants to help out - but not only do the Fijian police not want her help - they also think she could be a suspect!
With Louisa sidelined from the official investigation, this is more like an amateur detective story than a police procedural. She's forced to do things on the sly, without any of the resources available to the official investigation, although she does have the assistance of one of the local Fijian police, Constable Makareta, who's actually supposed to be keeping an eye on Louisa's movements.

In her first 'outing', Food of Ghosts, Louisa was trying to get to grips with the customs of the Pacific Island  Kiribati; this time she's equally adrift by being away from home on Fiji. It certainly doesn't come over as the idyllic paradise I've always assumed it to be - it has as many drug-dealers and prostitution rackets as any gritty European crime setting, and the weather seems just as wet (though undoubtedly hotter). This is though a lighter sort of crime novel - more Midsomer than The Bridge - with some decidedly comic moments in between the deaths; over all it's a fun, enjoyable read rather than a grim psychological study.